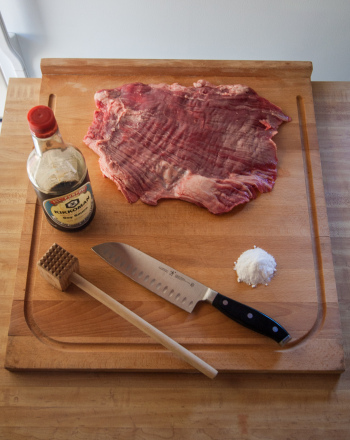 Discover the science behind the meat that you eat. Can science help you rock the barbeque? Let’s get cooking.

What techniques tenderize meat most effectively?

While cooking meat on a barbeque might seem pretty easy, there’s a lot of science behind tenderizing meat to make it softer.

The steak you’re experimenting with is made out of cow muscle, and muscle is made up of fibers. And just like the fibers in wood, muscle fibers run in a particular direction, called the grain. When you pull in the same direction of the fiber’s grain, the muscle gets longer but doesn’t break. This means that when you slice the meat with the grain, you’ll get a piece of meat made up of long pieces of fiber like long lines of spaghetti, and it’ll be harder to chew. If you slice against the grain, you’ll have many small pieces of fiber, and the meat will be easier to chew.

When you use soy sauce or baking soda, you’re using chemistry to make the meat softer. Have you made a baking soda and vinegar explosion? If so, you’ll know that baking soda reacts to acids in a big way. Baking soda is basic, and meat is slightly acidic.  The chemical reaction that happens breaks down the proteins in the meat and makes it softer.

Can you think of other ways to soften meat? Try them out next time you’re cooking dinner, and think about how science might help explain what happened!