How to Find Maximum Height of a Projectile 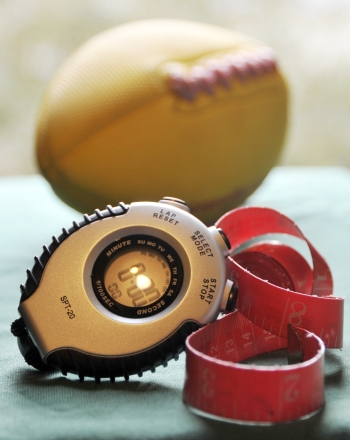 Ever wanted to know how high and how fast you can kick a football? Turns out, it’s pretty easy to figure out. All you need to know is how far away from you the ball lands and how much time it spends in the air (the “hang time”). Combine these two simple measurements with a little bit of physics and you can start competing with your friends to see who can kick the highest or the fastest!

How can you find a projectile's maximum height?

Given the hang time and distance traveled of a football, figure out how high it went, how fast you kicked it, and the angle at which it left the ground.

You have calculated the speed at which you kicked the ball (in meters/second), the angle at which it launched, and how high you kicked it (in meters).

The above may sound like a bunch of mathematical gobbledygook. But it’s based on a very simple, and very important, idea from physics: you can treat the vertical and horizontal motion of the ball independently.

Since the final and initial vertical speeds are the same, we can focus on just the second half of the ball’s trip. We can ask, how fast would a ball be moving after a certain amount of time if you dropped it from a great height? That’s another way of asking how fast the ball is traveling when it hits the ground after falling from the highest part of its journey. The “falling time” is half the hang time.

The total velocity comes from combining the horizontal and vertical velocities. We can draw the velocities like a right triangle. The horizontal and vertical velocities make up the sides of the triangle while the total velocity is its hypotenuse. Using the Pythagorean Theorem, you can use the sides to figure out the total speed with which the ball was launched. You can use the same triangle to figure out the angle at which it took off.

Figuring out the height comes back to just worrying about the ball’s vertical motion. We know how quickly the ball left your foot. And we know how strongly gravity is working to slow it down. That’s all we need to figure out how high the ball went. It’s the same as knowing how far your car will go if you’re driving at 60mph and suddenly hit the brakes. Except, in this case, the brakes are gravity!