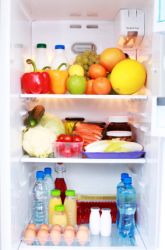 If you leave certain foods for too long in the fridge, they will start to spoil and the smell will sink into the structure of your refrigerator.

In this experiment, we will test four methods of replacing the bad odors with good ones. Lemons have a fresh citrusy scent. Baking soda is a very versatile cleaning agent. Active carbon, such as charcoal, sucks up odors. Coffee is grainy when ground up and smells pleasant.

How Stuff Works: What is Activated Carbon and Why is it Used in Filters?