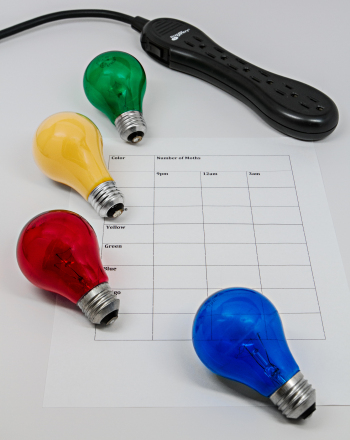 The project is about determining whether moths are attracted to one color of light more than others.

The goal is to have the student review the literature about moths and light and then formulate and test a hypothesis about how moths respond to different colors of light.

The reason why moths are attracted to artificial lights is not known. Part of the difficulty in answering this question may be due to there being many types of moths.

Some scientists have speculated that moths try to use artificial lights to navigate at night instead of moonlight. Light coming from the moon appears the same to both of the moth’s eyes, but the light from an artificial light source appears brighter in one eye than the other. In this scenario, the artificial light has a disorienting effect on the moth, causing it to spiral in toward the bulb.

Another idea is that the artificial light is mistaken by the moth for sunlight. When the moth gets close to the glowing bulb, it thinks it is in full daylight, and then settles down to sleep.

Still another idea is that moths use light from the moon to identify flowers whose nectar they feed on. According to this scenario, the light bulb might appear to be a source of food.

There are seven colors in the visible light spectrum. They are red, orange, yellow, green, blue, indigo, and violet.

Similar to an abstract

Materials can be found on the Internet and are readily available.

As an alternative you can purchase a rainbow fluorescent light that projects all the colors of the visible spectrum.

If you have a camera equipped for night photography, take a picture of the moths around the light to help you count them.

Color the Moth Fairy
Worksheet
Color the Moth Fairy
A fairy moth is a type of insect, but this coloring sheet features the opposite -- a moth fairy!
1st grade
Worksheet
Sunflowers and Moth Coloring Page
Worksheet
Sunflowers and Moth Coloring Page
The Sunflowers and Moth Coloring Page will engage second graders in adding color to bring the scene to life while learning the scientific names for the species!
2nd grade
Science
Worksheet
Light Sources
Worksheet
Light Sources
Without light sources, we wouldn't have any light. Can you imagine a world without any light sources?
3rd grade
Science
Worksheet
Light Bounces
Worksheet
Light Bounces
Did you know that light could bounce? Set up a light obstacle course with a few mirrors and watch light bounce around your room.
3rd grade
Science
Worksheet
Light Reflection
Activity
Light Reflection
What happens when light hits a hard surface? Find out by conducting a simple light reflection experiment with your preschooler.
preschool
Science
Activity
A Plant's Favorite Color
Science project
A Plant's Favorite Color
Determine if certain colors of light are more effective for photosynthesis. Plant seeds in cardboard boxes with different light, record visible growth.
Middle school
Science project
Light and Color
Workbook
Light and Color
Did you know that light can bend? Help your curious kids learn the important physical properties of light and explore how light adds colors to our world, with this beautiful series on light and color.
3rd grade
Reading & Writing
Workbook
Light Speed
Worksheet
Light Speed
Almost nothing in this universe can travel faster than light! Have some fun exploring the speed of light with this space science worksheet.
5th grade
Science
Worksheet
Light and Mirrors
Activity
Light and Mirrors
What is light, and how does it travel? Explore light and reflection with your preschooler with these simple hands-on experiments.
preschool
Science
Activity
Favorite Quotes
Worksheet
Favorite Quotes
Encourage your child to decode a favorite quote in this reading comprehension sheet.
4th grade
Reading & Writing
Worksheet
Make a Mother's Day Book
Activity
Make a Mother's Day Book
As Mother's Day approaches, everyone's grateful! Let your third grader assemble this special book with words from the whole family.
3rd grade
Reading & Writing
Activity
"S" Adjectives
Worksheet
"S" Adjectives
"S" adjectives can be simple, silly or scary! Your smart student will build her vocabulary full of descriptive "S" words as she practices parts of speech.
3rd grade
Reading & Writing
Worksheet
We enable strictly necessary cookies to give you the best possible experience on Education.com.Cookie policy