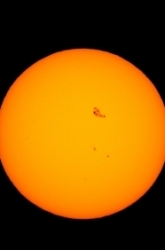 Purpose: My project was based upon the conservation of energy that can be harnessed by simply changing the structure of a house. Most houses seen today don't take advantage of the sun's energy, but changing the house a little can make a big difference.

Procedure: The sun's position in the sky is lower in the winter and higher in the summer, so to show that the passive solar house can save energy year round I ran two separate tests with ten trials each. During the winter tests the heat lamp was clamped at a lower position and during the summer tests it was at a higher elevation. After marking where the houses needed to be on the ground so that they were the same distance for each trial, I timed the experiment to be ten minutes for each house. Then after every ten minutes, I recorded the temperature and switched houses.

Conclusion: As I hypothesized, during the winter tests, the solar house heated much more quickly and therefore climbed to a much higher temperature every trial, while the ranch style house took much longer to heat and only rose a few degrees. During the summer tests both houses barely heated and both were at the same temperature. Overall, the passive solar house did harness more of the energy from the lamp.

In my project, the only dangers could potentially come from the building of the houses or the light bulbs being a fire hazard but proper safety measures will be taken, such as placing the bulb in a controlled safe area, wearing safety goggles, gloves, and using tools carefully.

Passive solar designs are simple, but really they are very detailed, and must be very detailed so that every aspect of the house works together. Passive solar houses require a different approach to designing and building because every house is heated in part by the sun, but passive solar houses harness as much energy from the sun as possible. Many people believe that solar homes will affect their everyday life style, or that they won't be able to control the temperature of their home. Solar Houses are built on a few standard concepts, the longest side of the house, or wall with the largest surface area should face south, so that in the winter the sun heats inside the house through the windows on the large south facing wall. Second, the house must be well insulated or capturing the heat from the sun. The wall facing south should contain several windows while the other remaining wall should have fewer, or none. (The main importance in the surface area of wall to window) Finally, provide shade to help regulate temperature in the house, such as placing a couple deciduous trees on the south side of the house because in the summer the trees have leaves to stop the light from heating the house and in the winter the trees lose their leaves and the sun light can then heat the house. (The Solar House, 2005) Passive solar is a great idea, the designs are crucial to the building of the house, they save energy, and passive solar houses are as easy to build as regular homes today.

The summer test is to show the amount by which each house increases when the sun is at a higher angle in the sky (at summer time). Both houses blocked heat very well and only rose one degree Celsius.
Winter Test 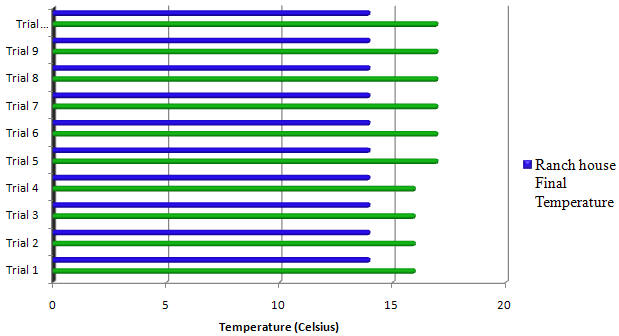 In the summer test, both houses blocked most of the light and heat from entering the house, proving that in the summer passive solar houses would block heat just as well or better than average houses. However, while in the winter test the normal house only increased by 0 to 1 degrees Celsius, the passive solar house heated up by 3 to 4 degrees Celsius. This test showed the potential energy saving abilities that the house would use in the real world, not including the other, internal techniques that can be put into the house.

The houses weren't exactly the same size and this may have had an effect on the results, but the effect would not be great enough to have changed the general point of the project.

Haun, L. (2002) How to Build a House. Newtown, Connecticut: The Taunton Press