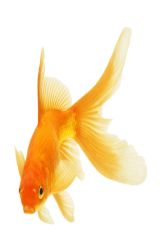 To determine if a goldfish can be trained to associate the sound of a bell with feeding time.

The purpose of this experiment is to see whether a goldfish has the intelligence necessary to respond to simple behavioral conditioning.

Through his research, Ivan Pavlov discovered that animals can be conditioned, or trained, to associate unrelated stimuli. In his famous experiment, he trained dogs to salivate at the ringing of a bell. By always ringing a bell before feeding the dogs, Pavlov taught the dogs that they were going to be fed when they heard the bell ring. After time, the sound of the bell became so closely linked with the idea of food that the dogs would salivate at the sound of the bell even when they were not fed. In this experiment, goldfish will be tested to see if they will respond in the same way. While a goldfish does not salivate, they do exhibit “excited” behavior during feeding time. This experiment will determine whether a goldfish can be conditioned to demonstrate this feeding behavior in the absence of food.