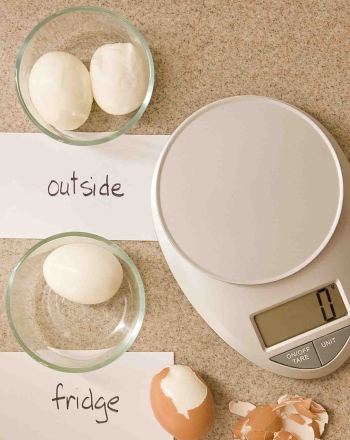 To determine whether cooling eggs helps them peel more easily

Does placing a boiled egg in the fridge make it easier to remove the shell?

An eggshell is a thin layer of calcium carbonate that is remarkably strong. It protects the developing chick from damage, and in an unfertilized egg it protects the protein and yolk until the egg gets to someone who will eat it.

The knotty question of how to remove a boiled egg from its shell has frustrated people since people began boiling eggs. It’s always possible to remove the egg, but sometimes a lot of the egg gets caught up in the shell. In this experiment, you will test to see if changing the temperature of the egg will change the properties of the protein or the calcium shell and make the egg easier to peel.

Terms/Concepts: How to boil and cool eggs; Physical properties of eggshells