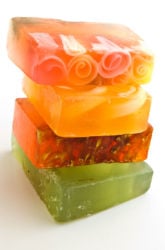 Rub-a-dub-dub, there’s pepper in my tub! In this experiment, you’ll use pepper floating on water to demonstrate how soap affects the surface of water. This is a quick experiment, but it’s so fun to watch that you’ll want to repeat it several times.

How does soap interact with water?

The first question to ask is why the pepper flakes float. Why don’t they sink or dissolve in the water? Well, pepper is hydrophobic, meaning that water is not attracted to it. Because of that, the pepper can't dissolve in the water. But why do the flakes float on top of the water? Water molecules like to stick together. They line up in a certain way that gives the top of the water surface tension. Because pepper flakes are so light, and hydrophobic, the surface tension keeps them floating on top.

Do you think soap is the only substance that can break down water's surface tension? Try conducting the same experiment but with olive oil or hair spray. Do you think the pepper flakes will react in the same way?