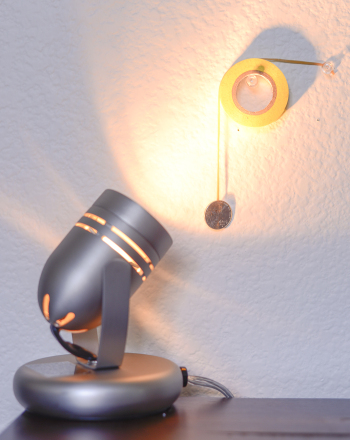 An engine is a machine used to transform one kind of energy into another to produce work. In this project, we'll learn how to make a rubber band heat engine, a type of engine that converts thermal energy, or heat, into mechanical energy, or movement.

Typically, things expand (get bigger) when heated, and contract (get smaller) when cooled. Have you ever heard creaking sounds in your room at night? These come from the floorboards contracting due to the drop in temperature that usually accompanies the sun going down.

However, this rule doesn’t apply to rubber! The molecular structure of rubber is very complex: Imagine a bunch of molecules linked together in a “chain” that resist being stretched when pulled on. This “stretchiness” enables rubber to be used in erasers, bicycle tires, and bungee cords. However, this chain-like structure also causes rubber to behave rather unusually during temperature changes.

What kind of work will a rubber band perform when its heated and cooled?

The rubber band will expand (lengthen) when rubbed with ice, and will contract (shorten) when heated by the lamp.

The work performed by your heat engine in this experiment is the movement of the weight by the expansion and contraction of the rubber band.

When the rubber band is cooled with the ice, its chain-like molecular structure becomes more rigid, or stiff—meaning the molecules aren’t vibrating and colliding with each other. This prevents the chains of rubber molecules from contracting, and the “chains” are allowed to loosen up— that is, the molecular bonds become longer and the rubber band gets stretched out.

Get another rubber band. Without stretching it, touch it to your lip. How does it feel? What do you notice about its temperature? Now, stretch it out quickly and bring it to your lip while it’s still stretched. You should notice that it’s warmer, because you performed work on the rubber band. The energy you gave the rubber band got converted to heat.

Wait a few seconds with the rubber band still stretched out. Quickly release the tension and let it assume its normal shape. Bring it to your lips now. It should feel cold, since it absorbed thermal energy!