Swiss scientist Daniel Bernoulli is often considered the father of fluid mechanics, and developed a mathematical relationship between pressure and fluid flow in the 18th century. Both liquids and gases are considered fluids, and the Bernoulli Principle is a mathematical explanation of why things can fly. The faster a fluid flows, the lower pressure it has. Flying objects (and animals) move very quickly relative to their size. Wings, called airfoils when being designed by engineers, are typically rounded on top and flat on the bottom so the pressure on the top of the wing is lower than the pressure of the bottom, creating lift. Lift is a force that is perpendicular to the direction of fluid flow— when air is flowing towards an object, lift is in the upward direction, opposite of gravity.

Planes, cars, bikes, and many other objects are used in wind tunnels to test aerodynamics, or how an object moves through air at many speeds. For bikes and cars, we want them to be pushed lower into the ground (no lift), whereas with airplanes we want them can to create lift so they can fly through the sky. Wind tunnels can be whole buildings which use powerful fans to test life size objects, or small models, like the one you will build and test today. 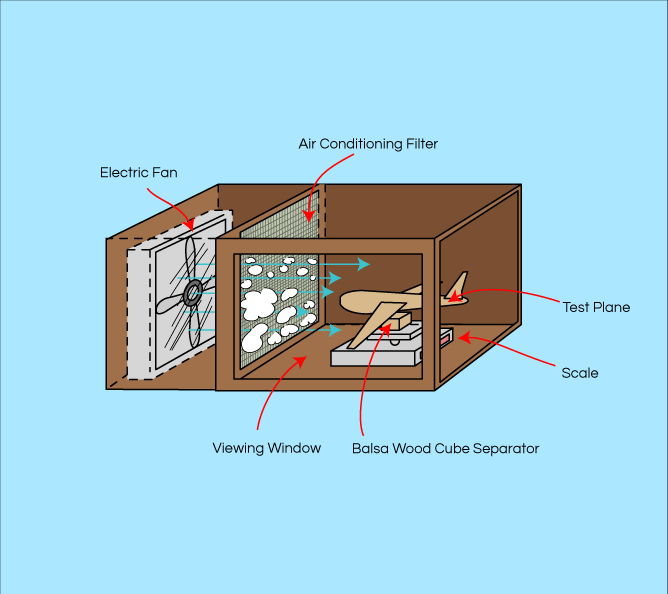 The scale will read a lighter weight as the plane is experiences lift. The plane will achieve more lift at faster fan speeds.

The original reading on the scale, the weight, is due to the force of gravity. The plane appears lighter as wind is blown over and under the wings and creates lift. The lift force acts in the opposite direction of the downward gravitational force so the plane puts less pressure on the scale. The shape of the object is one of the determining factors in how much lift an object experiences. This is why wings on planes and birds are similarly shaped.

The shape of objects can also push them closer to the ground rather than lift them up, like the airfoil—also called a spoiler—on a car. The way the air travels over the car and airfoil force air over the car, adding additional pressure (and thus force) downward. Racing cars use this to make tight turns without flipping or skidding.