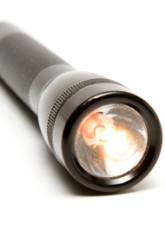 Light, a form of electromagnetic radiation, travels in waves. The range of the electromagnetic spectrum we can see is called visible light. Light intensity is a measure of the average power associated with waves, and is generally measured as the power per unit area. The more the light waves spread out, the less intense the light.

We perceive relative intensity as brightness. Brighter light corresponds to higher intensity. In this lab, you will assume the power output of either the flashlight or the laser pointer is constant for a given trial.

A flashlight uses reflective materials to spread out light to larger areas. A laser, which is an acronym for "light amplification by stimulated emission of radiation," emits a more focused beam of light.

Power output is also related to the life of the battery in a device. How do you think this change over time?

Observe brightness, the subjective measure of intensity, and observe how power relations to light intensity.

The farther away the flashlight is moved from the paper, the more squares on the graph paper are illuminated. This means the light is less intense (less power per square meter). For each trial (one set of measurements at a time), we will assume the power output of the flashlight and the laser pointer to be constant, so we can compare them at a distance. As the lights are left on, the batteries will dissipate energy, with losses to heat, light, and internal resistance, and will output less power. The longer the lights are left on, the less power they will output, and the intensity and brightness of the light will decrease.

The laser pointer will retain the same intensity for most of the experiment because it is a focused beam of light, and is not deliberately scattered and spread by the cone reflectors in the flashlight. However, the light will likely decrease in intensity towards the end of the battery life.