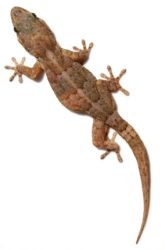 Talk to a science teacher or pet shop worker for information about how to care for lizards. Keep in mind that the lizards will need a home after the experiment, so make sure you are able to provide one for them when you are done. It may also be possible to borrow the lizards and the tank from a teacher, a friend, or even from a local pet shop that might be willing to support your scientific experiment.

Reptiles are cold blooded animals which means their internal temperature is governed by the temperature outside. This gives them certain advantages over warm blooded mammals. For one thing, reptiles do not need to eat as often as mammals. They have an extremely low metabolism and some can easily go for weeks or months with no food. Reptiles also do not expend energy keeping their bodies warm like mammals do, which means that they need far fewer calories to survive. But being cold blooded has its disadvantages too, mainly that reptiles can get quite slow and lethargic if they become too cold. Their responses may be dramatically slowed which can put them in danger if they are approached by a predator. All reptiles are affected in some way by the external temperature, but factors such as hunger and time of day also play a role on the behavior of these animals.

Reptile Recognition
Worksheet
Reptile Recognition
Help your child practice his science skills with this science worksheet, which will challenge his knowledge of reptiles and ask him to solve a puzzle!
3rd grade
Science
Worksheet
Trophic Level Pyramid
Worksheet
Trophic Level Pyramid
Cut out and complete this trophic level pyramid template!
3rd grade
Science
Worksheet
Spanish Reptiles
Worksheet
Spanish Reptiles
Fill in this worksheet with the correct Spanish word for each reptile.
4th grade
Worksheet
Opposites: Level G
Story
Opposites: Level G
This leveled book goes over opposites and works on higher-level reading skills for kids who might need a bit of a challenge.
1st grade
Reading & Writing
Story
Division Challenge: Level 3
Worksheet
Division Challenge: Level 3
Children take their math skills to the next level with this division worksheet!
4th grade
Math
Worksheet
All About Reptiles: Level F
Story
All About Reptiles: Level F
...This activity folds in multiple sentences and new sentence formations to challenge advancing readers. Plus, they'll learn some life science along the way....
1st grade
Reading & Writing
Story
Level Up! Graphing
Worksheet
Level Up! Graphing
Your students will take their knowledge of function tables to a new level when they generate a list of ordered pairs to graph.
5th grade
Math
Worksheet
Next Level Functions
Lesson plan
Next Level Functions
Take function tables to the next level when you teach your students to generate and plot ordered pairs.
5th grade
Math
Lesson plan
Monster Maze Level 5
Worksheet
Monster Maze Level 5
Solve the mazes like the levels of a video game; this level is the last.
Kindergarten
Worksheet
Reptiles: Level AA
Story
Reptiles: Level AA
In this leveled book, kids will work on the earliest building blocks of reading, and learn a little bit about science, too.
Preschool
Reading & Writing
Story
Dino Dot to Dot: Ichthyosaurus
Worksheet
Dino Dot to Dot: Ichthyosaurus
Learn about Ichthyosaurus, a reptile that lived in the ocean, with this cool dinosaur dot to dot activity.
1st grade
Science
Worksheet
All About Reptiles: Level C
Story
All About Reptiles: Level C
...What makes a reptile different from a bird or a cat?...
Kindergarten
Reading & Writing
Story
We enable strictly necessary cookies to give you the best possible experience on Education.com.Cookie policy