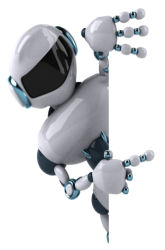 A robot is a machine that gathers data about its environment with a sensor and uses that information to follow instructions to perform a task. The sensor sends information in the form of electronic signals back to the robot’s controller circuit.

Robots that have the ability to move to different locations on their own use two types of motion: sequential (following an orderly pattern) and random (following no pattern). The robot in this project has a sensor that reacts to vibrations from sound or physical contact. It moves forward, but when it senses a high pitched-noise (such as a hand clap) or a vibration from physical contact with an obstacle, it retreats by reversing and turning left for a preset time before continuing forward on a new course. 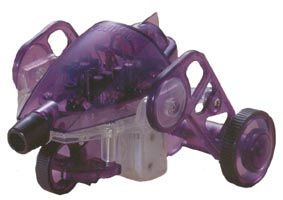 The robot is placed at the entrance of the maze, clapping or the vibration of the collision with the walls are the means for steering the robot through the maze. The following illustration shows the robot beginning its navigation through a simple maze.

An error is defined as any turn away from the correct path leading from the starting entrance to the exit. Performance of the robot is scored by tallying the number of mistakes made between the time of the robot enters the maze and its exit.

The robot must move directly from the starting point through the maze in a preset time period. If the robot does or does not exit the maze at the end of the set time this constitutes the end of trail one. The robot is then placed at the entrance and sent through maze again this same process is repeated for a minimum of 4 trials and a maximum of however many trials the investigator wishes to conduct. A stopwatch or other timing device is used to determine the time required for each trial.

Construct a motorized robot with a built-in sensor that reacts to vibration from sound or physical contact. Determine the average number of errors that the robot would make in going through the maze. 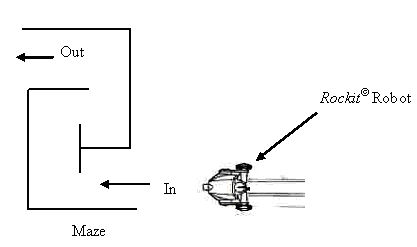