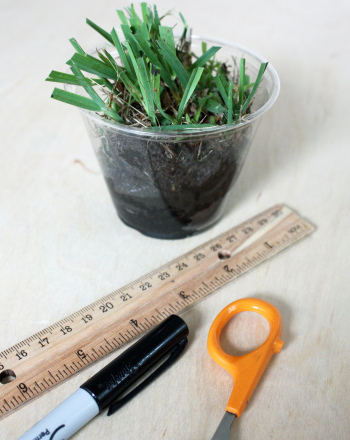 Let's go on an indoor safari to learn about savanna flora and fauna in this science project! Take a look at characteristics of tropical grassland plants and animals that help them survive.

Explore the flora and fauna of the savanna grasslands.

For your second experiment, you’ll learn more about the savanna animal, the zebra. The zebra is the striped member of the horse family. There are three different species of zebra: the plains zebra, the Grévy’s zebra, and the mountain zebra. Each species looks a little different, and within each species, each animal has different patterns of stripes. Why do you think a zebra has stripes?

The clipped grass will continue to grow, but it will not grow beyond the permanent marker line. Instead, it grows from the base.

What is a savanna? A savanna is a tropical grassland. The grass in the savanna isn’t what we think of as grass—it’s really long, up to six feet tall in some places. Savannas aren’t only made up of grass. They may also have tough trees and shrubs that can survive in conditions where water is scarce.

Savanna grasses are used to growing in a harsh climate. Large groups of animals will come to eat them, and they must be able to grow back. Savannas have a wet season, but are very dry for a lot of the year. The soil drains away water easily, so the ground itself is often dry. This means that these areas experience fires that can burn away the grasses.

Thankfully, grass is a tough plant. Even when the tops have been eaten or burned, the grass grows again. Your experiment showed that while the grass got taller, the line or marker stayed at the top. Why? Grass grows from the root and not the end, just like your hair! It can keep on getting eaten or damaged and it will still grow.

Savannas have a large diversity of ungulates, or animals with hooves. Large animals such as different types of antelopes and zebras graze on the tall grasses of the savanna. This attracts other, larger animals like lions to hunt the smaller and weaker animals in these herds.

One of the ways that these herds of animals stay safe is to disguise themselves in the thick grasses. This is especially important for young or very old animals. Zebras are masters of disguise, and their stripes look a lot like long, dried grass. When you hid your zebras in your pretend grassland, which ones did your friend see? The zebras that have stripes are much harder to see than your invented animals with spots or different patterns.