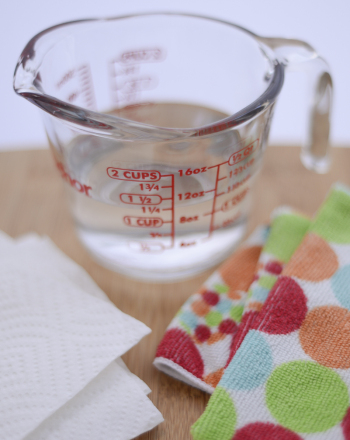 Surely, you have seen the ShamWow commercials on TV. At only $19.95 + shipping and handling, you can get several ShamWows so you'll never have to worry about misplacement. It also claims to hold 12x its weight of liquid. Many people are skeptical of whether spending $19.95 will really get the job done easier than a roll of paper towels, which costs less than $1 -- or even cotton towels, which you can often get for $1-3 for a pack that can last you a long time.

The hype with the ShamWow is justifiable, as it is said that these ShamWows are made of a blend of rayon and polypropylene, which makes it super absorbent, but lightweight. Cotton is known for being very absorbent, that is why towels and other cleaning cloths have a high or complete cotton content. Paper towels are cheap, disposable, and get the job done. But which fares better in the long run in terms of saving money and effectiveness?

Among these choices, which is the most absorbent: ShamWow towels, ordinary paper towels or terry (cotton) towels?

Make Paper Towel Ghosts
Activity
Make Paper Towel Ghosts
They're made out of paper towels and are a cinch to create!
preschool
Arts & crafts
Activity
Opinion vs Fact
Worksheet
Opinion vs Fact
Hone writing skills by identifying opinion vs fact.
4th grade
Reading & Writing
Worksheet
Ninjas vs Zombies
Worksheet
Ninjas vs Zombies
It's ninjas vs zombies! Who will win? Flex your imagination to create a funny or crazy story to answer this writing prompt.
5th grade
Reading & Writing
Worksheet
Facts vs. Opinions
Worksheet
Facts vs. Opinions
Learn about facts vs. opinions in this reading comprehension worksheet. Kids will read two sets of text and decide which is fact and which is opinion.
2nd grade
Reading & Writing
Worksheet
Pirates vs. Dinosaurs
Worksheet
Pirates vs. Dinosaurs
It's pirate vs dinosaur in this friendly face-off. Who do you think will win?
2nd grade
Worksheet
Living vs Non-Living
Worksheet
Living vs Non-Living
Decide what differentiates living vs non-living things! First cut out the items on page 1, and then sort them in the chart on page 2.
1st grade
Science
Worksheet
Brown vs. Board of Education
Worksheet
Brown vs. Board of Education
In this Brown vs. Board of Education worksheet, children read the story of how the landmark decision came about, as well as the struggle that followed.
5th grade
Social studies
Worksheet
Physical Change vs Chemical Change
Worksheet
Physical Change vs Chemical Change
This worksheet teaches your student about physical change vs chemical change, matter, mass, and property. An exciting experiment reinforces the concepts.
4th grade
Science
Worksheet
Joule Heating: Resistance vs. Temperature
Science project
Joule Heating: Resistance vs. Temperature
Explore joule heating and resistance vs. temperature with this cool electricity science fair project that gets kids melting ice cubes with resistors.
Science project
Magnetic Field Strength vs. Distance
Science project
Magnetic Field Strength vs. Distance
How can we describe the relationship of magnetic field strength vs. distance? Kids will find out with this free science fair project idea.
2nd grade
Science project
Growth vs. Fixed Mindset
Worksheet
Growth vs. Fixed Mindset
In this social emotional learning worksheet, students collaborate to write and perform a skit that demonstrates their shared understanding of a growth vs. fixed mindset.
4th grade
Worksheet
Paper Towel Science Project: Capillarity
Science project
Paper Towel Science Project: Capillarity
This easy and inexpensive paper towel science project introduces kids to important physical concepts like cohesion, adhesion, and capillarity.
3rd grade
Science project
We enable strictly necessary cookies to give you the best possible experience on Education.com.Cookie policy