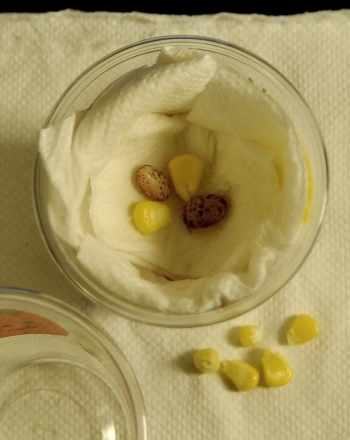 How does a corn seed grow, and how does its growth differ from that of a bean seed?

Over four or five days, the corn will begin to sprout. Two different structures will come out of the corn kernel.

A seed is the house for a future plant, outfitted to furnish what a baby plant needs to start to grow and succeed in life. A seed is wrapped in a tough outer coating that prevents the future plant from damage. Inside, there is a food supply and the beginnings of a new plant.

In the world of flowering plants, there are monocots and dicots. A monocot seeds has an embryo that contains one cotyledon, the part of the plant that becomes its first leaves. A dicot seed has an embryo with two cotyledons. The dicot cotyledons can absorb the nutrients for the plant until the plant is ready to make its own food through photosynthesis. Corn kernels are monocots, and pinto beans are dicots.

Inside a corn kernel, there is a cotyledon near the bottom, pointy bit of the kernel, where the new plant begins to grow. It is surrounded by the endosperm, which is starchy food for the baby plant. When the kernel begins to grow, its protective covering breaks open in two places. The top breaks open to reveal the coleoptile and eventually the plumule, the future shoot of the plant. The bottom breaks open to reveal the coleorhiza and eventually the radicle, the future root of the plant.

Like the corn seed, the bean seed has places where the root and the leaves emerge. However, since bean seeds are dicots, when you open one up, you'll see it has two cotyledons that look like reverse copies of each other. Instead of having a separate baby plant and food supply, inside the bean plant the cotyledons contain the endosperm (the food supply).

What happens when the two plants grow into plants with leaves and roots? What are the similarities and differences between the monocot corn plant and the dicot bean plant then?