Friction is kind of a drag. Every time you push on something, friction pushes back. To get an object moving, you have to overcome the friction force first. If you’ve ever walked on pavement and suddenly stepped on a patch of ice, you know that different surfaces have different amounts of friction.

What determines how much friction an object experiences? Is it the type of material? The object’s weight? The amount of surface area in contact with the ground?

The ice cube slides first, followed by the coin, and then the eraser. Breaking the eraser and ice cube up into smaller pieces doesn’t make a big difference in regard to the angle at which everything starts sliding. All the pieces should start sliding at roughly the same angle.

In this experiment, you had to keep tipping the book until the force of gravity became stronger than the friction force. Both forces depend on the angle of the book. As long as the friction force is larger, the objects won’t move.

For extra credit, you can use the angles you recorded to calculate the coefficient of friction for the ice, coin, and eraser. Looking at the figure, there are two forces that determine whether or not the objects move: friction and gravity. The force from friction is Ff = μmgcosθ, where

The force from gravity is Fg = mgsinθ. The objects start sliding when gravity is greater than friction, or mgsinθ > μmgcosθ. 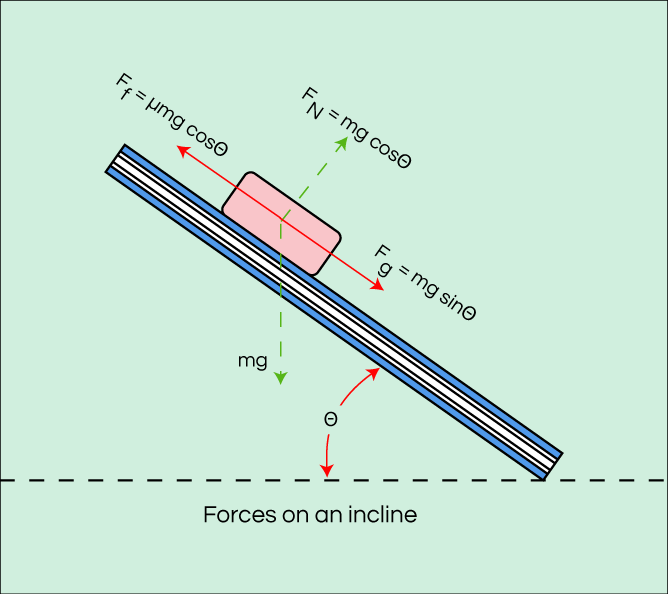 Because m and g are on both sides of the inequality, they cancel out. Mass and gravity don’t matter! All that matters is the angle. Rearranging that inequality, you find out that things start sliding when tanθ > μ. To calculate the coefficient of friction for each of your objects, take the tangent of the angle at which each started sliding (that’s the TAN button on your calculator). Write down your results here: