Radio Frequency Identification (RFID) is a ubiquitous form of Near Field Communication (NFC) technology that has been adapted by numerous industries to identify items, goods, and people. RFID systems operate through a transmitter, which constantly releases pulses of ElectroMagnetic energy. When a card is placed within range of the transmitter, the energy found in the ElectroMagnetic Field (EMF) powers the card, enabling the card to execute the requested command and send the result back to the transmitter. As RFID technology is becoming more integrated into our daily lives (office buildings, shipment tracking, theft prevention, passports, credit cards, transportation systems, etc.), it is even more important to understand the possible health risks from the EMF emitted by RFID transponders. This experiment tested the EMF to determine the overall safety of these devices. A TriField 100XE meter was placed adjacent to the transmitter to record the strength of the field before, during, and after RFID cards were scanned by various transmitters. At the conclusion of the experiment, 16 different transponders were tested in 6 different systems, and a total of 80 samples were collected.

The only possible safety issue is the exposure to the ElectroMagneitc fields produced by the RFID transmitter (as shown by the US Department of Energy study of EMFs and the US Environmental Protection Agencyʼs report attempting to classify EMFs as Carcinogens). However, since exposure to this device is ubiquitous (and since the device can not be tested without exposing oneʼs self to the EMF) safety precautions were neither plausible nor possible.

Approximately four weeks were spent on research, ten weeks on experimentation, and four weeks on analysis, explanations, and presentations.

The purpose of the project was to measure the ElectroMagnetic Fields produced by RFID (Radio Frequency Identification) transmitters. Using this information, one could determine the safety risks (and properly understand the tradeoffs) of repeated RFID transmitter use.

Radio Frequency Identification (RFID) is a ubiquitous form of Near Field Communication (NFC) technology. Used in Credit Cards, Passports, ID Cards, and Theft Prevention systems, RFID sensors are able to transmit data through a Power - Transmit - Receive (PTR) process. This process begins with the transmitter, which sends an electromagnetic pulse to the RFID card. Using the electricity in the pulse, the card powers itself and begins the transmission process. The transmission process consists of the transmitter sending a command to the card. The card receives the command and executes the appropriate action. This cycle repeats until all data has been properly transmitted.

While RFID technology has many practical applications, exposure to high levels of ElectroMagnetic Fields (EMFs), such as those found in RFID systems, have been shown to cause numerous biological effects (as described in the discussion section). While the exact point where biological effects begin to occur is unknown, the average is around 3 MG (the most extreme is 1.75 MG; the most conservative is 5 MG). This experiment measured the ElectroMagnetic Fields (as measured in MilliGausses - 10-7 Teslas - by a TriField 100XE meter) produced by these RFID systems at various stages of the transmission process. Using this data, one will be able to properly understand any risks associated with RFID technologies.

The independent variable was the RFID transmitter; the dependent variable was the ElectroMagnetic field produced by the RFID device. The testing materials, such as RFID Cards, were kept the same throughout the experiment. For a control, the TriField 100XE meter was calibrated using a known EMF source (such as a computer monitor) to check the machineʼs ability to accurately calculate the deviceʼs EMF. The data was measured in milligausses (equal to 10-7 Teslas). Data was measured and recorded in the Data Logbook. 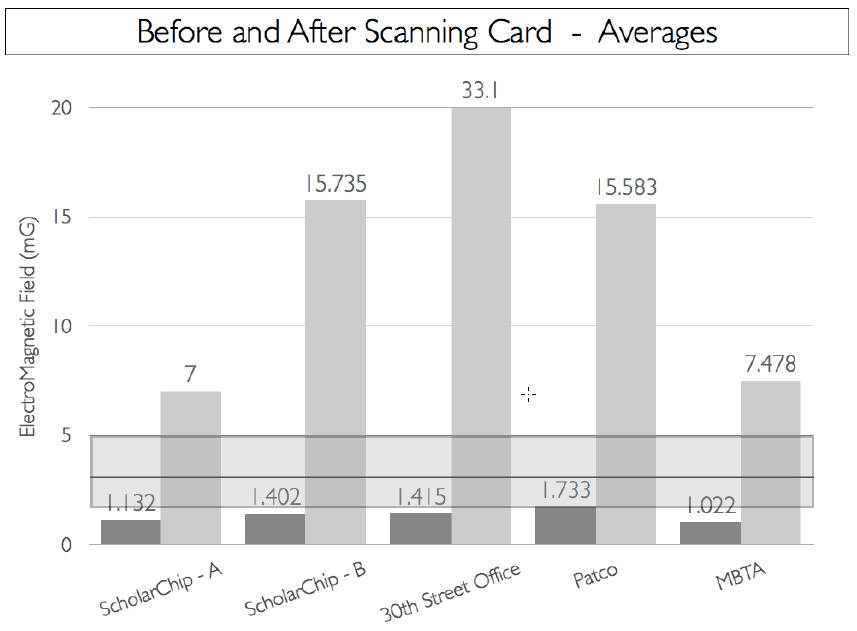 Note: The graphs above shows the results, once averaged, for the before and during/after tests. This is separated by device. The shaded gray region represents the suspected range wherein dangerous biological effects can occur. The dark line corresponds with 3 MG, the point at which most scientists believe EMF-related effects begin. 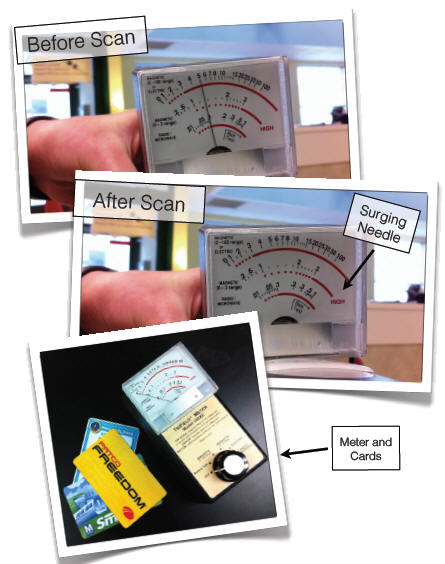 There are many possible future adaptations of this experiment. One possible study could directly measure the radiation (as measured in Specific Absorption Rate, or, SAR) from EMFs. This would directly explain why various biological effects occur from exposure to various ElectroMagnetic Fields. In addition, testing other EMF sources (such as microwaves and cell phones) could determine, as some have claimed, whether exposure to EMFs through RFID devices is negligible when compared to these other sources.

Fields of Scientific Study Vocab
Worksheet
Fields of Scientific Study Vocab
This worksheet will quiz your child on the different fields of study in science. What's the difference between a zoologist and a geologist? Find out here!
4th grade
Science
Worksheet
Electromagnetic Induction Experiment
Science project
Electromagnetic Induction Experiment
Kids make an electromagnet in this electromagnetic induction experiment to learn about induction, current, and the right-hand rule.
Science
Science project
Synonyms for Smart
Worksheet
Synonyms for Smart
You know your child is smart, but are they brilliant, shrewd and resourceful? With this worksheet, they'll learn 24 synonyms for the word "smart."
4th grade
Reading & Writing
Worksheet
Electromagnetic Ring Launcher
Science project
Electromagnetic Ring Launcher
Use an Elihu Thomson apparatus, also known as a ring launcher, to learn about electromagnetism concepts and the properties of various metals.
Science project
Color a Birthday Card
Worksheet
Color a Birthday Card
Put a smile on someone's face, and send birthday cheer with a homemade card! Your child can color and decorate this card herself.
kindergarten
Arts & crafts
Worksheet
Make a Library Card Holder
Activity
Make a Library Card Holder
Celebrate your kindergarten grad's new âbig kidâ status by signing off on her first library card and making a library card pocket holder to stash it in.
kindergarten
Arts & crafts
Activity
Make a Birthday Card
Worksheet
Make a Birthday Card
Got a birthday coming up? Show that special someone you really care by making a homemade card with this cute printable!
2nd grade
Arts & crafts
Worksheet
SAT Card Shark: Strategies for Sentence Completion
Activity
SAT Card Shark: Strategies for Sentence Completion
Try this game for some card-slinging study fun!
High school
Activity
Santa Card
Activity
Santa Card
Give a holiday greeting that everyone will remember by making this tactile card with your child this year.
1st grade
Arts & crafts
Activity
Heart Card
Activity
Heart Card
Our heart card is a little piece of modern art that makes a great Valentine's Day gift for a creative friend. Make a heart card using paper, paint, and marbles.
preschool
Arts & crafts
Activity
Study Time!
Worksheet
Study Time!
One great way to encourage good study habits is to create a permanent "study corner" for your child.
3rd grade
Arts & crafts
Worksheet
Color a Holiday Card!
Worksheet
Color a Holiday Card!
Print this coloring page on card stock paper and your child can create her own Christmas card!
kindergarten
Arts & crafts
Worksheet
We enable strictly necessary cookies to give you the best possible experience on Education.com.Cookie policy