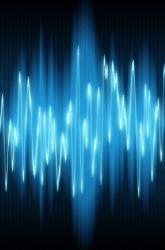 The project is about finding a mathematical relationship between the intensity of a sound wave and distance from the sound source.

Whenever an object vibrates in the air, it emits sound waves. As the sound waves travel through air, they transport the energy produced by the vibrating object. The amount of energy that is transported past a given area per unit time is known as the intensity.

As a sound waves travels through air, its intensity decreases. This is because the energy of the wave is distributed over a larger area. Since total energy must be conserved, the energy per unit area must decrease.

The scale that is used to express intensity is based on powers of 10. Known as the decibel scale, it assigns a level of 0 decibels to a sound intensity of 1x10-12 W/m2. A sound that is 10 times more intense is assigned a value of 10 dB, and a sound 100 times as intense is given a value of 20 dB. This means that if a sound is 10x times more intense than another sound, it has a decibel reading that is 10x higher than the less intense sound.

Materials can be found on the Internet.

The measurement locations should fall in a straight line.

Long A Sound
Worksheet
Long A Sound
In this worksheet, children will complete each sentence using a word with a long A sound.
2nd grade
Reading & Writing
Worksheet
Ou Sound
Worksheet
Ou Sound
Did you know the "ou" sound has more than one sound? Get to know this vowel blend a bit better with a match-the-sound activity.
1st grade
Reading & Writing
Worksheet
A Thunderous Sound
Science project
A Thunderous Sound
Science fair project that examines what causes thunder and why a thunderclap sounds so loud. How is lightening related to the creation of sound waves?
2nd grade
Science project
Experiment With Sound Waves
Activity
Experiment With Sound Waves
Every time a sound is produced it emits a sound wave. This experiment demonstrates how sound travels, using nothing more than a spoon and a string!
5th grade
Science
Activity
Sound Physics: The Difference Between Sound and Noise
Science project
Sound Physics: The Difference Between Sound and Noise
Learn about sound physics and do a survey experiment to explore the difference between sound and noise in this science project.
3rd grade
Social studies
Science project
Speed of Sound
Worksheet
Speed of Sound
How fast does sound travel? Help your child figure out the physics of sound waves with this informative worksheet.
5th grade
Science
Worksheet
What is Sound?
Worksheet
What is Sound?
Did you know that sound is actually caused by movement? Vibrations of particles create the sound that we hear.
5th grade
Science
Worksheet
Sound Resonance: How to Calculate Speed of Sound
Science project
Sound Resonance: How to Calculate Speed of Sound
In this cool sound resonance experiment, learn about frequency and pitch, and use a tuning fork to calculate sound velocity in air.
Science project
The Science of Sound
Activity
The Science of Sound
What causes sound? Here's a simple science experiment that adds a visual element to the science of sound to help kids better understand this tricky concept.
3rd grade
Science
Activity
Long "A" Sound: Follow Long A
Worksheet
Long "A" Sound: Follow Long A
From snake to candy cane, kids follow the long a sound to find their way to the end of the maze.
kindergarten
Reading & Writing
Worksheet
Movie Sound Effects
Worksheet
Movie Sound Effects
Learn about movie sound effects with this reading and writing worksheet. Your young movie fan will enjoy learning about the job of sound designers.
5th grade
Reading & Writing
Worksheet
Sound Connections
Worksheet
Sound Connections
Put your kindergartener's sharp ears to work by helping him match pictures with the same beginning sound.
kindergarten
Reading & Writing
Worksheet
We enable strictly necessary cookies to give you the best possible experience on Education.com.Cookie policy