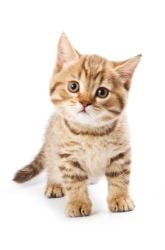 Do you speak cat? Take a closer look at your furry friend (or the furry friend of a neighbor -- with permission) to discover if communication really can exist between a cat and its owner.

Can a cat communicate with a human?

You should have been able to understand a least one or two things that your cat was trying to communicate.

Cats have learned how to communicate their needs to humans. The sounds a cat makes when it is hungry and trying to communicate this to its owner are different from the sounds that it makes at other times. Why? Cats and people have a long history.  They have been associated with humans for almost 10,000 years. Originally, cats became domestic animals because they would hunt mice. This was very useful to people who kept food and animals.  Today, many cats live with humans in their houses, and they communicate their needs to humans. Cat language is very diverse. Cats purr, meow, hiss and growl.  They also use their bodies to communicate. A cat usually hisses and growls when it is angry.  Cats can purr when they are happy, but they also purr in other situations. Some cats even purr when they are having kittens.  Cats often use meows to communicate with people in different ways. They tend to meow more at people than at other cats. Cats have different noises that they use to ask for food or to greet their humans. A UK study discovered that cats use a “soliciting purr” to get humans to wake up and feed them. Inside this purr is a high-pitched sound that sounds like a baby crying. Since humans tend to wake up and act when they hear a baby crying, this purr helps get them out of bed so that they can feed the cat. Every cat has a different voice. What does your cat sound like when it greets you or asks for food?