Log in with different email
For more assistance contact customer service
Entire library
Science projects
Middle School
Exploring Where to Build in Earthquake Country: A Study of Liquefaction in Sand, Rock, and Soil

Exploring Where to Build in Earthquake Country: A Study of Liquefaction in Sand, Rock, and Soil 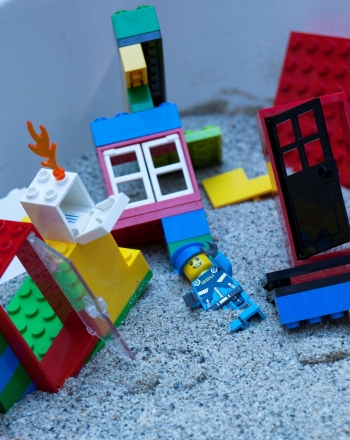 The goal of this experiment is to explore how building on different types of soil affects the relative stability of buildings in an earthquake. Students will build a shake table upon which a basin holding soil is affixed and compare how easy it is to topple a Lego structure standing on gravel, sand and clay soils. The objective of this experiment is to see first-hand how different soils affects the stability of buildings in earthquake country.

During the 1989 Loma Prieta earthquake, many people were surprised that some of the worst damage to buildings occurred far from the epicenter of the quake. This damage occurred because of liquefaction. Liquefaction refers to the process by which a solid appears to turn into a liquid. While most students are familiar with walking on sand at the shore and seeing their footprints fill with water, they are less familiar with the stability of building in earthquake country as a function of liquefaction.

Many of the materials are readily available at home. If Legos are not available, other building kits such as Lincoln Logs or Erector Set structures can be substituted. Soils can be obtained by a quick trip to the sand box, beach, local creek and back yard.

University of Washington: What is Soil Liquefaction? http://www.ce.washington.edu/~liquefaction/html/what/what1.html