3-D Model of the Sun 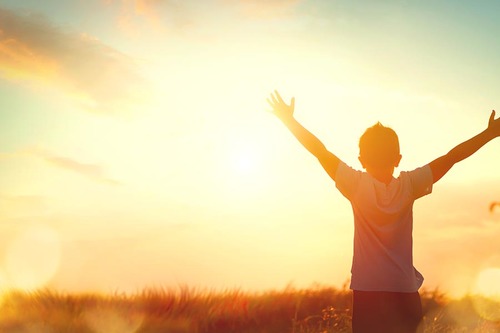 When the sun is shining in the sky, it looks like a big ball of light. It’s actually a lot more complicated than that. The sun has layers, and it also has places where it looks bumpy or spotty.

The center of the Sun is the core. It’s very dense but very hot, so it is a gas. Its temperature is 15 million kelvins (27 million degrees Fahrenheit)! In the core of the sun, nuclear reactions called fusion make energy in the form of gamma rays and neutrinos. This area has a radius of about 90,000 miles.

The radiative zone is about 190,000 miles thick. This area delivers the energy from the core into other parts of the sun.

Outside the convective zone are three layers. The photosphere is the layer that we actually see when we look into the sky, and surprisingly, it’s only about 300 miles thick. It contains energy that’s in the visible light spectrum. The  chromosphere is outside the photosphere and is just over 6,000 miles thick. It’s very hot, but it’s only visible with special instruments that help us see infrared light. The outer layer is called the corona, and it’s the hottest part. It’s also the widest at around 3 million miles thick.

The heat moves giant solar winds around the open spaces on the Sun. In addition to layers, the Sun also has irregular areas called  sunspots. Sunspots are dark, oddly shaped areas on the surface of the sun, and they appear and disappear. In 1609, the invention of the telescope helped early scientists such as Galileo and Christoph Scheiner observe these spots. At first, they weren’t sure what the spots were and thought that they might be moons crossing the sun. Galileo then determined that the spots were actually on the surface of the sun. Today, we know that sunspots are caused by magnetic activity that changes the patterns of motion in the sun. The dark middle part of a sunspot is called the umbra. The umbra is cooler than the rest of the sun and has a strong magnetic field. It’s surrounded by a ring called the   penumbra. Sometimes the surface of the sun looks bumpy like sugar crystals. These bumpy areas called granules are areas of the sun where hot material comes to the surface before fading quickly.

Create a three-dimensional model of the interior of the sun.

Surface Features of the Moon Model
Science project
Surface Features of the Moon Model
Explore the craters, maria, and highlands on the surface of the Moon! In this fun science project you'll create a 3-D model of the moon using paper mache.
5th grade
Science project
3-D Flower Card
Activity
3-D Flower Card
The special people in your life deserve a special card! Have your kid make a 3-D flower card that will let a loved ones know how much he appreciates them.
5th grade
Arts & crafts
Activity
What Causes the Phases of the Moon?
Science project
What Causes the Phases of the Moon?
What cause the phases of the moon? Make a model to see how the positions of the Sun, Moon, and Earth cause the crescent, gibbous, quarter, full, and new moon.
5th grade
Science
Science project
Find the Surface Area: Cube
Worksheet
Find the Surface Area: Cube
Once your fifth grader has mastered the basics, it's time to start finding the surface areas of 3-D shapes--like cubes.
5th grade
Math
Worksheet
Faces, Edges and Vertices
Worksheet
Faces, Edges and Vertices
Start the basics of geometry by looking at 3-D shapes and counting the faces, edges and vertices.
5th grade
Worksheet
3-D Art Project
Activity
3-D Art Project
...Let her repeat steps #4 and 5 for all the pieces of fabric until the sun shape is filled. Voila! She has a three-dimensional image of the sun!...
5th grade
Arts & crafts
Activity
Area Model: Multiply Mixed Numbers
Worksheet
Area Model: Multiply Mixed Numbers
Use this scaffolded math exercise to teach your students how to use the area model to multiply mixed numbers.
5th grade
Math
Worksheet
How to Build a DNA Model
Science project
How to Build a DNA Model
Learn the basic structure of a DNA strand, which is the double helix, how genes form together, and the resemblance DNA has to a twisted ladder. Create a model.
Middle school
Science project
Home Row Typing: D and K with Squirrel
Game
Home Row Typing: D and K with Squirrel
Students gain accuracy in the D and K keys in this lively game.
1st grade
Game
Windmill Model Science Project
Science project
Windmill Model Science Project
In this windmill model science project, you will build a windmill to learn about wheel-and-axle machines and how these simple machines are used to do work.
5th grade
Science project
Pump Up the Volume
Workbook
Pump Up the Volume
Practice calculating the volume of 3-D shapes using a variety of techniques and with real-life examples through a series of engaging problems and questions.
5th grade
Math
Workbook
Learn Chinese: Color the Number 3
Worksheet
Learn Chinese: Color the Number 3
Children learn to identify and pronounce the number 3 in Chinese in this language worksheet featuring a popular Asian fruit.
preschool
Worksheet
We enable strictly necessary cookies to give you the best possible experience on Education.com.Cookie policy