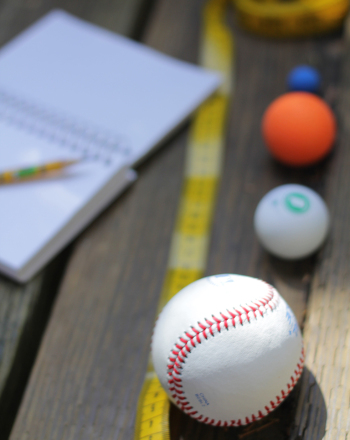 If I asked you to throw both a baseball and a bowling ball, which do you think you could throw farther? Obviously, you would throw the baseball farther. Heavy stuff just slams into the ground! But does that necessarily mean that the lighter the object, the farther we can throw it? Let’s put this theory to the test.

Can we really throw lighter objects farther than heavy objects?

When you throw an object, physics is at work calculating just how far it goes. The distance an object is thrown relies on the force put into it. Force is the mass of an object multiplied by how fast that object accelerates. When throwing a very light object, you may be able to accelerate it very effectively, but because it weighs so little, the force applied to it will be tiny. This explains the short distance traveled by the marble and BB gun pellet. When thrown, a heavy object may have a lot of mass but will accelerate really poorly because your throwing arm is only so strong! Only a small force ends up being applied to it, which explains the extremely short throwing distance traveled by the bowling ball. So what’s the key to throwing things great distances? A balance between mass and acceleration, which is why the baseball travels the farthest.

What if you used different shapes of objects? Or used something to launch your objects besides your arm? This experiment can be altered in a variety of ways to demonstrate physics in action.