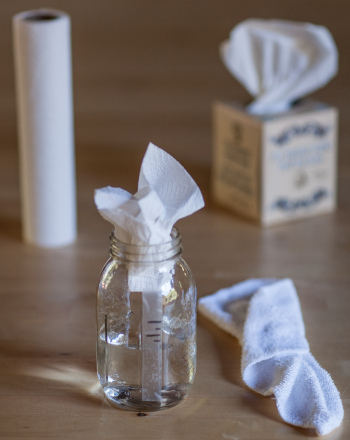 Have you ever wondered why some towels pick up more liquid than others? There is a variety of factors that make some types of cloth more absorbent than others, and the brand that advertises that it picks up the most isn’t always the best! What do you think will happen when you test a facial tissue against a hand towel? Which one will absorb the most liquid, and why? Are some items engineered to absorb more liquid than others?

Which type of cloth is the most absorbent?

If a towel is thicker, it has more fibers to absorb water with! The fibers in tissues and paper towels are made of cellulose molecules—big molecules that consist of lots of tiny sugar molecules chained together. Have you ever seen how easily sugar dissolves in water? Because cellulose is made of sugar, water molecules rush into the cellulose fibers when cellulose and water meet.

Terry cloth is usually made out of cotton, another fiber that is almost pure cellulose. The secret behind why terry cloth works so well is that these fibers are looped around and around so that the cloth is thicker and has more fibers per square inch.

With a thicker towel, you get more fibers that can absorb more water. So if a towel absorbs more based on how thick it is, what do you think will happen if you use a sheet of paper towels that’s two or three layers thick? Try it. Do they absorb more liquid?

This experiment can also be expanded to include materials engineered to absorb more liquid, such as those used in disposable baby diapers. Try soaking up some liquid with a baby diaper. Even though the thickness might be similar to that of a terry cloth towel when the towel is folded, you’ll find that the baby diaper soaks up more liquid. Why? The secret is in a polymer called sodium polyacrylate—a water-absorbing crystal. These crystals are even more absorbent than cellulose fibers are!