Apparent Weightlessness in an Elevator 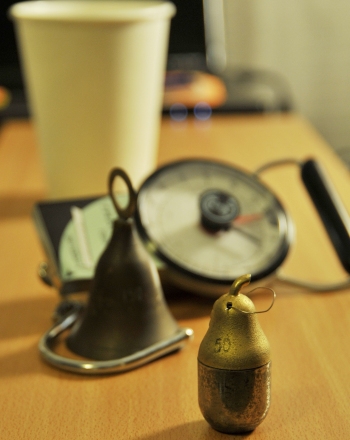 Astronauts have to contend with a number of unusual issues while living on the space station. Possibly the biggest difference between life up there and life down here is the apparent “weightlessness”: Nothing stays put, not even yourself! There’s no guarantee that water flows down, and if you don’t strap yourself in at bedtime, you might wake up in a storage closet.

Many people think that astronauts are weightless because there’s no gravity up there. But as it turns out, the space station is subject to quite a bit of gravity (How else would it stay in orbit?). In fact, the Earth’s gravitational force at the space station’s altitude is only about 10% less than what it is at the earth’s surface. So what’s going on?

When something is in orbit, it is said to be in free fall—it is falling through space with no force pushing back. But it falls at the exact same rate that the surface of the Earth curves away from it. If it falls a hundred feet vertically, it also moves far enough horizontally so that the Earth’s surface drops off by the same amount. A satellite basically falls without ever hitting the ground.

In this experiment, you’re going to play around with how falling—and any kind of vertical motion—affects an object’s apparent weight.

For the first experiment, as soon as you pour water into the cup, water starts leaking out the bottom. When you drop it, however, the water stops leaking while the cup is falling.

In 1589, Galileo reportedly dropped two balls with different masses off the Leaning Tower of Pisa and noticed that they hit the ground at the same time. When astronaut David Scott stood on the Moon in 1971, he famously replicated Galileo’s experiment in the near vacuum of the Moon’s environment using a feather and a hammer. Sure enough, they hit the lunar surface at the same time!

This probably sounds completely counterintuitive. You might think that gravity would pull more strongly on the hammer and make it fall more quickly. It’s true that the hammer feels a stronger gravitational pull than the feather; however, because the hammer has more mass, it’s also more difficult for any force (including gravity) to move it! Try pushing on a shopping cart and a car with the same amount of force and see which one moves more easily. The hammer’s resistance to movement cancels the stronger gravitational force it feels.

When you drop the cup, both the water and the cup fall at the same rate. The water drips out, but the cup catches up! Weirdly, the water is momentarily suspended within the leaky cup.

The same thing happens to astronauts onboard the space station. They don’t appear weightless because there’s no gravity; they appear weightless because, as mentioned earlier, they are always falling. And so is everything else onboard: tools, food, and clothing. The astronauts in the space station are like the water in your cup. They are falling along with the station, free to drift around as they please.

The second experiment drives this home further. Weight is just the force on your body from gravity. When you pull the scale up, the force from your hand has to overcome the gravitational force. Because the mass feels more force, its weight appears to increase. The weight while moving is actually called the apparent weight; it takes into account other forces besides gravity. When you move the scale down, the force from your arms removes some of the gravitational force and the apparent weight goes down. What happens to the weight if you lift up the scale and then drop it? How is this like the first experiment?

The experiment in the elevator is no different, except this time the elevator motors are doing the work instead of your arm. What do you think would happen to the weight if the elevator cable broke?

Apparent Movement of the Sun
Science project
Apparent Movement of the Sun
The apparent movement of the sun has been used to keep time since the bronze age. In this science fair project, kids plot solar time against mean solar time.
Science project
Simple Machines: Pulley
Worksheet
Simple Machines: Pulley
Did you know that an elevator is actually one of the six simple machines? Help your child understand how the pulley works.
2nd grade
Science
Worksheet
Missing Numbers: 1-5
Worksheet
Missing Numbers: 1-5
This elevator-themed worksheet is about counting and finding the numbers in a series.
kindergarten
Math
Worksheet
Measuring Magnification
Science project
Measuring Magnification
This science fair project idea investigates how optical distances change the apparent size of an object as seen through a magnifying lens.
2nd grade
Science project
Minutes in an Hour
Worksheet
Minutes in an Hour
How many minutes in an hour? Count them up yourself in this intro-to-elapsed-time worksheet.
3rd grade
Math
Worksheet
Indicate an Omission With an Ellipsis
Worksheet
Indicate an Omission With an Ellipsis
In this eighth-grade grammar and mechanics worksheet, students will learn how to use an ellipsis to indicate an omission when quoting from a text!
8th grade
Reading & Writing
Worksheet
Research an Ecosystem
Worksheet
Research an Ecosystem
Students research an ecosystem of their choice and create an ecosystem model in this life science worksheet for middle grades!
6th grade
Science
Worksheet
A or An
Worksheet
A or An
Practice choosing between a or an and writing them in sentences in this quick drill worksheet.
2nd grade
Reading & Writing
Worksheet
Is There an "A" in Chess?
Science project
Is There an "A" in Chess?
Monitor the impact learning how to play chess has an academic performance. Divide subjects into two groups compare GPA
High school
Science project
Keywords in an Election
Worksheet
Keywords in an Election
In this social studies worksheet, learners will read a short paragraph about elections and then complete a crossword puzzle using vocabulary from the text.
2nd grade
Reading & Writing
Worksheet
An Introduction to Hindi Vowels: An, Ah
Worksheet
An Introduction to Hindi Vowels: An, Ah
In this worksheet, we'll be learning to write and pronounce vowels an and ah.
preschool
Worksheet
Picture Word Maze: "-an"
Worksheet
Picture Word Maze: "-an"
Here's a fun way to get to know the word family AN! Draw a line through the pictures that end in "-an".
preschool
Reading & Writing
Worksheet
We enable strictly necessary cookies to give you the best possible experience on Education.com.Cookie policy