What Affects the Appearance of Afterimages? 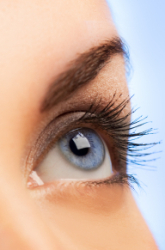 This project is about after-images and what possibly affects them. An after-image is an image that is generated in the eye and stays with you even after you have stopped looking at the object. Human subjects stared at a colored picture for one minute. Then they looked at a blank sheet of white paper and indicated when an after-image appeared.

Subjects were instructed to stare at a picture of a green apple with a red leaf and timed for one minute. At the end of one minute subjects were instructed to look at a blank sheet of white paper and indicate as soon as the after-image appeared. A light probe was used to insure that the light was kept within a certain range. Then data was recorded to include age, gender, corrective lenses, time and light intensity.

I thought age would affect the length of time it took for an after-image to appear. Age didn't appear to a factor but subjects who wore glasses took almost twice as long to see and after-image. It was very interesting that twenty percent of all subjects did not see any sort of an after-image.

What variables affect the appearance of an after-image in humans?

An after-image is the negative of the image you were looking at. This happens after staring at an image for thirty seconds or more. When you turn away the cones in your eyes become over tired from looking at the same image. Then these cones start to relax and the cones that produce the opposite color take over and the opposite color appears on your retina, this is the after-image.

After-images can be seen anywhere. If a flash from a camera goes off, then a blue-yellow shape of the flash appears. When a person looks at a green object for a long period of time then turns away they will see red. Bright light might stay for up to ten seconds but color will only stay for a couple seconds, although the bright light hurts the eyes for a long time.

Often subjects would say "neat" or "cool" when seeing the after-image. Many subjects were doubtful of seeing the image and were extremely amazed when they did.

I think it took older subjects longer to see an after-image because their rods and cones are worn and don't react as fast as a younger person's does. I accept the hypothesis. I feel that a larger sampling of people would prove my hypothesis even more.

I found it very interesting that twenty percent of subjects saw no after-image. This could be explained if subjects didn't understand my instructions. Also I believe that subjects who mentally decided that this was impossible did not see an after-image because they didn't want to.

A major factor (according to the graphs) was vision. Subjects who didn't wear glasses saw the after-image in half the time it took subjects with glasses. I think that this because most of the subjects tested wore glasses. Most people who wear glasses are old, and as I stated above older subjects took longer to see and after-image.