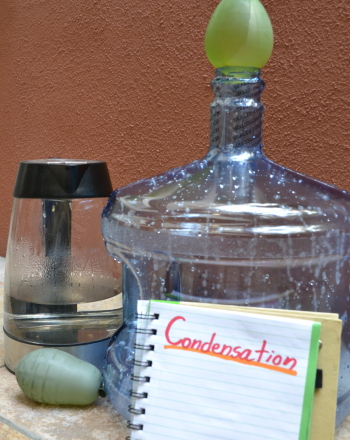 Water molecules are busy dancing around all the time. But the dance really gets interesting when you add heat to them.

The hotter molecules get, the faster they move, turning from water to steam. And when liquid water turns to gas, not only do the molecules move really fast, but they get spaced so much farther apart that they generate pressure by pushing on everything they come into contact with. Take the heat away from that steam, and it becomes liquid water again. This is called condensation.

Ever wonder where those little drops of water that form on the outside of your cold can of soda come from? That’s condensation!  The cold aluminum can causes water vapor in the air to cool down and form tiny beads of water on the can’s surface. The molecules in these beads of water are grouped far more closely together than when they were in their gas phase. So, in an enclosed space, what kind of effect do you think condensation would have on pressure?

What happens when we let cooling steam condense in a bottle that has a water-filled balloon placed over its neck?

After a minute or two, the balloon should have been pushed into the bottle.

Here’s when everything changes: when the water stops boiling, and the steam starts cooling down. The water molecules start condensing—that is, they start turning from steam back into water. When matter turns from its gas phase back into its liquid phase, the molecules take up much less space, and exert far less pressure. But the air outside the bottle didn’t change, and it’s still exerting pressure of its own! Now, we have what is called a pressure gradient instead of a state of equilibrium, because the air can’t flow freely into the bottle with the balloon in its way! So what happens? The air pressure pushes the water balloon through the neck of the bottle.

How can you take this experiment further? Good places to start include changing the size of the balloon or changing the amount of water in the bottle. The great thing about scientific experimentation is that the possibilities are endless.