What Is Persistence of Vision? 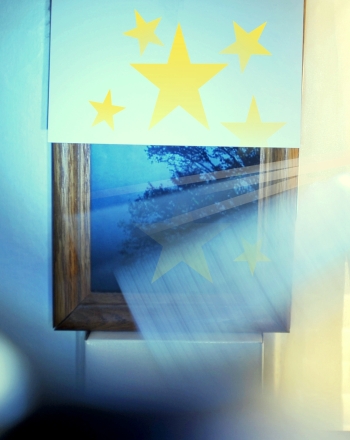 Magicians can do all kinds of neat stuff, like pulling rabbits out of hats and making objects mysteriously disappear.  Science is even more powerful!  For this science fair project, you’re going to see if persistence of vision can help you make a floating image of anything you want appear out of thin air.

How can we use what we know about persistence of vision to make an image appear out of thin air?

Even though you removed your screen, the light from the image you projected is still focused at the same point in space.  All that you need to see the image again is a surface placed in the same spot to reflect the image’s light back to you or your friend’s eyes.  The wand reflects light back to your eyes in narrow slices. Luckily, your eye “remembers” each slice for 1/30 of a second.  This is called persistence of vision. The images our eyes pick up don’t disappear immediately after we see them; they linger!  If you move the wand fast enough, your eyes have time to send a bunch of these slices to your brain at the same time. Our brain can puts these slices together, and so we can see the entire image.

Animation relies on persistence of vision. If you’ve ever made your own flip book, you’ll know why. Take a notebook and draw a dot on the left side of one page.  On the next page, redraw the dot just a little more to the right.  Keep doing this on each page until your dot image has moved all the way to the right side of the page.  Now, flip the pages of notebook quickly. Since your eye retains each image of the eye for 1/30 of a second, the dot seems to move across the page smoothly as long as the pages are flipped quickly enough. All animation from Mickey Mouse to Monsters University relies on persistence of vision to make the illusion of movement look smooth and natural.