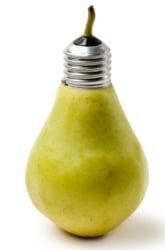 In this science fair project, construct batteries from various fruits and test them to see which one will produce the most electric current. Then, determine if it would be practical to use fruit as a natural source for generating electricity.

When two dissimilar metals are placed in a common conducting solution, electricity will be produced. This is the basis of the electro-chemical cell, or wet cell. In the early nineteenth-century, Alessandro Volta used this fact of physics to invent the voltaic pile and discovered the first practical method of generating electricity. Constructed of alternating discs of zinc and copper metals with pieces of cardboard soaked in a salt solution between the metals, his voltaic pile produced an electrical current. Alessandro Volta's voltaic pile was the first "wet cell battery" that produced electricity.

A wet cell consists of a negative electrode, a positive electrode and an electrolyte, which conducts ions (atoms with an electric charge). In this science fair project, copper and zinc metals will be used as the electrodes and the citric acid found in fresh fruit is the electrolyte. The chemistry behind the fruit cell is that zinc is more reactive than copper which means zinc loses electrons more easily than copper. As a result, oxidation occurs in the zinc metal strip and zinc metal loses electrons which then become zinc ions. The electrons then flow from the zinc strip to the copper strip through an external circuit. In the copper strip, reduction occurs and the hydrogen ions in the fruit's critic acid juice accept these electrons to form hydrogen gas; this explains why the investigator may observe bubbling of gas produced at the copper strip when the two metals are connected by a wire.

In this project an LED is used to indicate if the fruit-cell is generating an electric current. A Light Emitting Diode (LED) is a semiconductor device which converts electricity into light. An electric current can flow only in one direction through LEDs, which means that they have a positive and negative terminal (also referred to as the anode and cathode).  The cathode should be connected to the negative zinc metal strip, and the anode to the positive copper strip.

Safety: The fruits used in this project should not be eaten. Care should be taken when handling the metal electrodes, LED and alligator clip leads.

​If the LED does not light up, connect several fruit cells together attaching copper to zinc on each fruit. Also if a small motor is used instead of an LED and it doesn't automatically start when attached to the fruit cell, twist the armature.