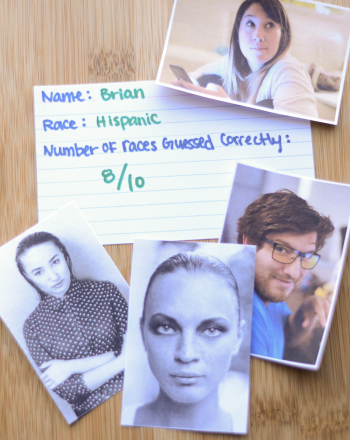 This project explores to what extent people more easily distinguish between faces of people of their own race or ethnicity compared to those of other races or ethnicities.

There is a neurological disorder called prosopagnosia that makes it difficult to impossible for people to distinguish between human faces - in the worst cases, even the faces of close family members. There are obvious evolutionary advantages to being able to recognize people, not the least of which is to distinguish between friends and enemies, and most humans are able to do so with great facility, but none so well, apparently, than infants. It seems that at the age of just a few months infants begin to fine-tune their face recognition skills for the types of faces which they see most often, usually faces of people of their own race or ethnicity. This specialization, however, comes at the expense of recognition-skills for less-frequently encountered facial types. To put it bluntly, human babies learn to be bad at distinguishing people foreign to them. As the saying goes, those foreigners “all look alike.”