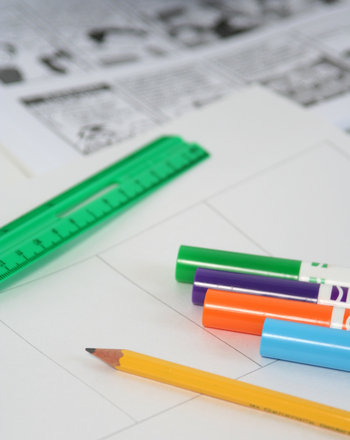 When you think of writing skills, you probably remember long essays, research reports, tests, or other stressful school assignments. But communicating using the written word doesn't have to be tough! It can be as simple as telling a story, as rudimentary as writing a wish list, or as fun as composing a comic strip. And while these tasks may not sound like much, getting your child comfortable with writing, no matter the context, will help them find the fun in even the most challenging writing assignments down the road! Here's how to get your kid writing their own comic strip.

Look over the newspaper comic strips, and discuss some of the common features with your child. For example, they usually feature:

Brainstorm with your child to come up with a subject or scenario for their comic strip. Is the strip about the trials of being a kid? Is it about something that happened at school? Or does it take place in another location, such as outer space or the age of the dinosaurs? Encourage your child to be creative - there are no rules, and no one is grading them on their performance! Once your child has settled on a plan for the strip, they can get started on actually drawing it out.

Use the ruler to draw a rectangle the length of the paper, and divide the rectangle into 4-5 squares. Your child will need to make certain that the squares are large enough to draw the picture and add in the text while being both visible and legible.

Draw the picture that will go in each of the frames. Keep in mind the story that you are trying to tell, and make sure to save room for the speech bubble. Is the character angry? Amused? Bored? Try and convey your comic with words and pictures. Sometimes it is the contrast between text and image that is the source of the humor.

Write the sentences that go with each of the frames on a separate sheet of paper. (This is to let your child see if the sentence will fit into the available space.) Next, write the sentence into the appropriate frame, and draw a speech bubble (or thought bubble) around the text. If you wish, you can color the comic strip to give it "Sunday comic" flair.

To expand on the complexity of this activity, your child can create their own comic book. The main difference in the activity is that your child will fold 7-8 pieces of paper in half, and then divide each page into 2-4 squares.

One other adaptation is to find a way to share the comic strip with others. Ideas for this include:

Once you have a digital copy of your strip, the sky's the limit! There are several ways to share your child's work, from emailing it to setting up a blog where it can be showcased.