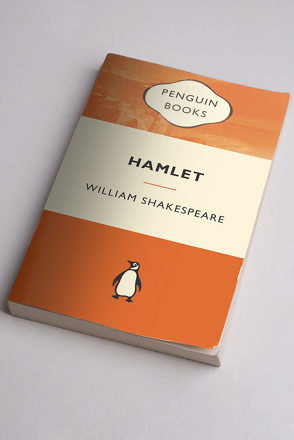 If your teen is moaning and groaning about his latest reading assignment, have no fear. At the heart of Hamlet lies a tale of murder, intrigue, and revenge to rival a gory slasher flick. But how to get past all the unfamiliar language? To help your teen get through this Shakespearean classic, here's a teen-friendly refresher course in the plot of this classic work of literature, with some SAT vocabulary thrown in.

Hamlet always thought there was something fishy about his mother marrying his uncle so quickly after the death of his father. But he never realized how fishy until his father’s ghost appears to him begging for vengeance. Hamlet’s father reveals that he was murdered by his brother in order to take over as King of Denmark and as husband to Gertrude. Now that Hamlet is confronted with the knowledge he is convinced of what he must do, right? Actually, he has to think about it a little more first, giving special attention to the question of whether he is just plain crazy. In fact, he spends much of the play exploring his thoughts and emotions out loud (maybe for the benefit of an audience?).

First, Hamlet sets about verifying his dead father’s story, because ghosts are not always reliable witnesses. His behavior is strange to those around him, as he sneaks around, asks odd questions, and acts in a generally suspicious manner. He was never all that fun to begin with, but now Hamlet's uncle-father and queen-mother are worried for his sanity.

Useful vocabulary to describe the personality of Hamlet:

Lord Polonius, friend of the court and old blowhard, has told his lovely daughter Ophelia to stay far away from Hamlet because he only has one thing on his mind. (Polonius believes that Hamlet’s strange behavior might be a result of a broken heart.) Uncle Claudius, new King of Denmark, thinks it might be because he married Hamlet’s mother moments after his brother’s body cooled - but hey, the Ophelia theory sounds good, too. Polonius and Claudius agree to spy on the two having a conversation and quickly hide behind a tapestry as Hamlet approaches Ophelia.

Ophelia returns Hamlet’s letters and gifts, but Hamlet, rather than seeming broken up, launches into a furious rant about people, women, and marriage. (I think he has a reason to be a little anti-marriage right now, don’t you?) Polonius says that Hamlet was just playing it cool and resolves to catch Hamlet speaking to his mother, because a boy will always tell his mother about his girl troubles, right? Poor, old Polonius.

Gertrude and Claudius, rather than admitting that their relationship is just creepy, bring in two of Hamlet’s friends, Rosencrantz and Guildenstern, to see if they can figure out what’s eating Hamlet. They are going to follow him and report back if he does anything strange – like talk to ghosts or kill someone.

In the meantime, after quite a lot of thought, Hamlet has a plan! He will engage the theater troupe that is performing for the castle to perform a play akin to what actually happened, because apparently killing your brother and marrying his wife is a very common plot line. While Claudius watches the play, Hamlet will watch him to see if he betrays any signs of guilt or remorse. Well-reasoned, Hamlet! And it only took him three acts to think of it!

Useful vocabulary to describe Hamlet’s consideration of his plan:

During the play, Claudius is visibly uncomfortable, shifting in his seat, pulling on his collar… but the most telling moment occurs just as the murderer is about to commit his hideous act. Stop! Claudius can stand no more and calls for the lights, ending the performance. I’d say that was a dead giveaway, wouldn’t you?

If that wasn’t enough for the audience, Claudius later confesses his sins to God and prays for forgiveness. Hamlet stumbles upon him, but resists killing him at that moment, believing that if he kills his uncle while praying his soul will go immediately to Heaven, without going to jail or collecting $200.

After the play, Gertrude summons her son for a private chat in her chamber. Polonius pulls the old hide-behind-the-tapestry trick and waits to hear what he is sure will be a confession of Hamlet’s love for Ophelia. Poor, stupid Polonius.

As soon as he arrives, Hamlet starts laying into his mother about her callous behavior regarding his father’s death. Gertrude, afraid for her own safety screams for help, and Polonius, forgetting all the basic rules of hiding, yells for help too. Hamlet realizes that some one is hiding behind the tapestry but thinks that it is Claudius. He rams his sword into the tapestry killing Polonius, and is only a little remorseful when Gertrude shows him what he has done. Poor, dead Polonius.

Gertrude immediately runs to Claudius and tells him what happened. (Nice loyalty, Mom.) They decide to ship him immediately to England. Rosencrantz and Guildenstern are instructed to find him and escort him directly to the ship. In addition to the luggage, Rosencrantz and Guildenstern are carrying a very important letter that clearly details how Hamlet is to be treated once he arrives in England. Do you think the letter says:

A. Give Hamlet a puppy. B. Take him to a fancy restaurant for dinner. C. Kill him immediately.

If you chose C, congratulations! You think like Claudius!

When is being attacked by pirates a good thing? When Hamlet's ship is set upon, and he returns to Denmark. Once Hamlet returns he confides to his friend Horatio that he discovered the letter while rummaging through Rosencrantz and Guildenstern’s belongings. Furious that even his friends were pawns of King Claudius, he wrote a new draft that stated the bearers of this letter should be killed.

During Hamlet’s sea cruise, Laertes, son of Polonius, has arrived at Elsinore looking for Hamlet in order to avenge his father. He’s even more cheesed off when his sister Ophelia commits suicide, driven mad by grief over the loss of Hamlet and the death of her father.

And now everyone, Act Five! Or as it is more commonly known, “The Scene Where Everybody Dies.”

Claudius has had enough of crazy Hamlet threatening the throne and wife that he has rightfully usurped. He tried to get rid of him in England, but Hamlet, that wily devil, evaded his plan. He will not allow the same mistake this time and puts two plans in motion that will surely result in Hamlet’s death. The first is to talk Laertes into a duel with Hamlet; Laertes will use a sword with a poisoned tip. For added peace of mind, Claudius will also poison a glass of wine to give Hamlet in the event of his victory.

Useful vocabulary in a conversation about Hamlet’s conspiracy:

So here we go, keep your eye on the poison.

The fight between Laertes and Hamlet begins civilly enough. Hamlet gets in a jab at Laertes and everyone toasts! Claudius puts the poison in his glass and offers it to Hamlet on his next contact with Laertes, but Hamlet refuses. Gertrude, driven by her obvious drinking problem, takes Hamlet’s glass and drinks the poisoned wine herself. Good thing Claudius had a back up plan!

Laertes gets shot in, too, and draws Hamlet’s blood with the poisoned sword. But later in the fight, as they struggle with both swords, he is inadvertently stabbed with his own poisoned sword. Gertrude falls to the floor, announcing that the wine must have been poisoned. Laertes confirms that he also has been poisoned by the sword and that both plans were Claudius’s idea.

Hamlet is furious and stabs Claudius with the poisoned sword and makes him finish the poisoned wine. He then feels the effects of the poisoned jab himself and sinks to the floor near Laertes so the two can exchange apologies. (I’m sorry, Dude. No, I’m sorry Dude.) Hamlet lives long enough to tell his story to Horatio and dies himself.