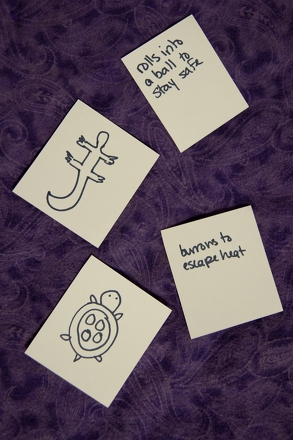 Adaptation is described as the way a plant or animal adjusts to its environment. For example, animals that live in a desert environment have developed unique ways to adapt to the hot, dry climate. In this game, players will learn interesting facts about animal adaption and practice them using a fun matching card game! Here the instructions for the game as well as a list of interesting animal adaptations to get you started.

The descriptions of the animals listed below are detailed to get the big picture of the animal and its adaptation. When it is time to play the game, it will be up to your child to summarize the adaptation and narrow it down to one or two things that identify what kind of change happens to help them survive. Here a some animal adaptations from the hot desert to get your child on track:

Now it is your child's turn to complete the other 8 cards for the matching game. Have fun creating more cards from what your child  has learned in school, or investigate animal adaptation in books, on the Internet, or at your local science museum!