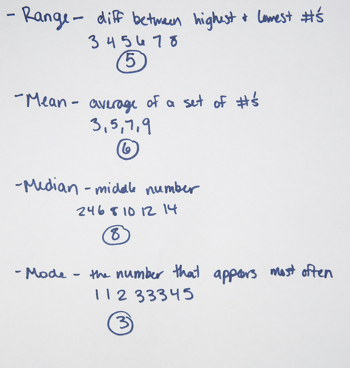 For some math concepts, doing the math itself is easy. The hard part is helping your child remember which formula to use for which term! To illustrate the mathematical concepts of range, mean, median, and mode, here are some quick activities you can do with your child:

“Mean” is the average of a set of numbers. A word association you can use is to have her think of what something “means.” A person can talk for hours about something, but when you narrow it down, you can describe what the person “means” in a sentence or two. It’s like taking the average of all the things he said. So when she’s asked to find the mean, that will help her remember that it’s the average. To find the mean, add all of the numbers together, then divide by how many numbers there are. For example, the mean of 3, 5, 7, 9 would be 24 (the sum of the numbers) divided by 4 (there are 4 numbers), which is 6.

To illustrate the idea of “median,” take her outside (or for a ride) and show her the median in the street. It’s the divider in the center of the road. The median is the number in the center of a set of numbers. An easy way to find it is to write the numbers in order, then narrow the set down by removing two at a time – the highest and the lowest. So, the set:

which gives you the median, 8.

Now, you can’t remove both numbers, so you have to determine what number is directly in between the middle two. In this case, it would be 7, and that’s your median!

“Mode” is the number that appears the most often. Talk about something like modes of transportation. Have her associate “mode” with the mode of transportation that’s used the most often by students at her school. Is it walking? Taking the bus? Being dropped off by parents? Whichever is the most common, have her associate that with the word “mode.” To find the mode, just count the numbers to see which one appears the most. In the set: