Observe the Greenhouse Effect in a Jar 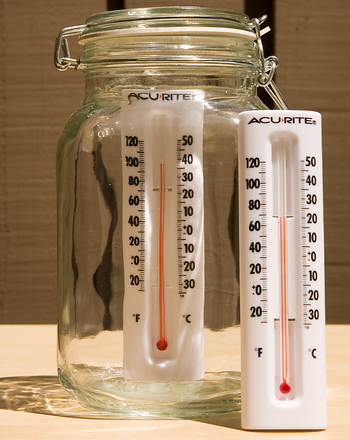 This experiment gets kids exploring how a greenhouse works, and in turn how greenhouse gases affect the Earth's atmosphere. Your child will strengthen observation and recording skills, work with a control, and draw conclusions. And bonus: this is a great outdoor activity!

What's Going On?  The thermometer outside of the container is constantly being exposed to air that is constantly changing temperature, as the warm air mixes with passing cooler air. The air inside the container is trapped and can't mix with the cooler surrounding air–it just gets warmer as the sunlight heats it up. A greenhouse works in a similar way; solar energy in the form of light creates thermal energy, or heat, that can't escape through the glass.

Greenhouse Effect in a Jar adapted with permission from http://sln.fi.edu/tfi/activity/earth/earth-5.html (The Franklin Institute Resources for Science Learning).