Play with Pasta...and Learn to Write 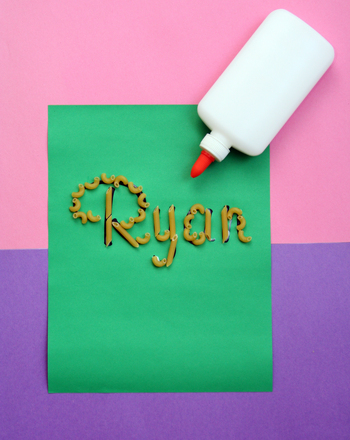 Pasta makes a great dinner, but it can also be used to teach kids proper letter formation! In this easy activity you’ll help your child become aware of the way letters should be formed. Beginning writers often approach letter writing like drawing, trying to replicate the shape of the letter like they’d try to copy a picture of a sun or moon. They need to be taught that each printed letter is created by using a combination of straight or curved lines, sometimes referred to as ball and stick letters. In other words, there’s a structure to printing! With a little pasta and some glue you can show your child how it’s done.

Once it’s dry, give your child’s masterpiece a prominent place on the fridge. All that glue and pasta has given him some insight into how letters are formed, and letter formation is an important tool as your child becomes a writer. The fact is, children who find it less difficult to write letters are more likely to want to write. And the more your child writes the better he’ll get. So keep practicing, and keep that pasta handy!