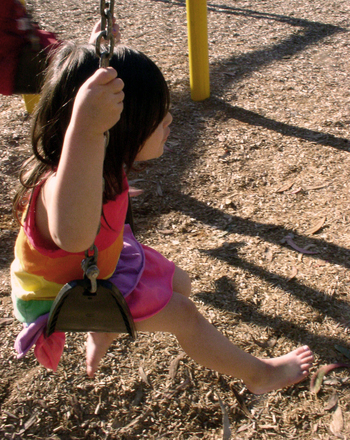 A playground is a great place for anyone to study the laws of physics. Gravity? Race a friend down the fire pole. Friction? Try making it down the slide in wet jeans. Centrifugal force? Take a spin on the tire swing.

All of the fundamental concepts in physics are at play when your child is at play, and there are any number of ways to explore physical science with your child. Here is an example of a quick experiment you can conduct at the playground to introduce or reinforce the concept of Newton’s First Law, The Law of Inertia.

Simply put, Newton’s First Law states, “A body in motion remains in motion, a body at rest remains at rest, unless acted upon by a force.” Everything in the universe wants to keep going (or stay still), unless something else makes it stop (or go). This tendency is called “inertia.” Two major forces that are always at work against inertia here on Earth are gravity and friction. Most fifth graders have had plenty of experience with these (Ever fallen off your bike?), but they are good to review.

To reinforce these fundamental physic laws on the way to the park, discuss inertia, gravity and friction (without causing a car crash, which would be a fabulous, but dangerous demonstration of all three). Then, challenge her to experience inertia first-hand. Climb on the swing and start pumping. After a few good swings, have her try to jump off the swing and stand still. Can she do it? Most likely she will fall down or have to run. That is her inertia, or tendency to keep going, at work.

Have her try again, swinging lower and slower each time, until she can jump off and stick her landing. Explore the playground together and identify where inertia and the forces of gravity and friction work against one another. No longer will a trip to the playground seem like a “walk in the park.” This is real learning!