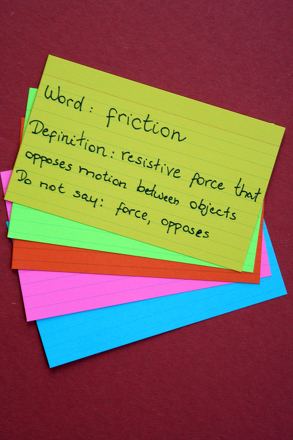 Help improve your middle schooler’s science vocabulary by playing a variation of the game “Password”. This activity will help your child review science concepts, learn new ones, and become familiar with the definitions and examples of various concepts in science. Plus, it's fun!

Example Card:
Word: friction
Definition: resistive force that opposes motion between objects
Do Not Say: force, opposes
Example Play:
You could say: slows things down, occurs between car tires and the road, using the breaks to stop a car takes advantage of this concept, there is less of this when you ice skate then when you walk on pavement, air resistance is a type of this, etc.