Log in with different email
For more assistance contact customer service
Entire library
Activities
Fifth Grade
Write an "I Have a Dream" Speech!

Write an "I Have a Dream" Speech! 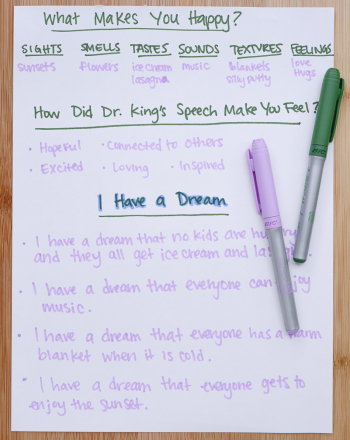 Racial barriers were shaken with Supreme Court decisions like Brown v. Board of Education in 1954, which ruled that separate schools for blacks and whites were “inherently unequal.” Still, in the fifties and sixties, equality was far from a reality.

In August 1963, Martin Luther King Jr. helped organize the March on Washington. On the steps of the Lincoln Memorial, King delivered his “I Have a Dream” speech, and his passionate words signaled the push for desegregation and the Civil Rights Act of 1964.

The civil rights leader proclaimed: “I have a dream that one day on the red hills of Georgia, the sons of former slaves and the sons of former slave owners will be able to sit down together at the table of brotherhood.” He also speaks of places: “snowcapped Rockies of Colorado,” the “slopes of California,” and the “mighty mountains of New York.” He evokes sounds, too, like children singing of a “sweet land of liberty,” and other senses, as when he speaks of Mississippi, a “state sweltering with the heat of injustice.”

Ask what your child has learned at school about Martin Luther King Jr. Hopefully, she has learned that this speech was one of hope during a time of strife – and described what King envisioned for the world in which he lived.

Your child, too, most likely has a dream: a vision for a bright future. How does she picture the world, from the blocks of her neighborhood to the far reaches of the globe? In her eyes, what constitutes a “happy” and “free” society? First, she must unlock this imagery. Then, she can create her own speech.