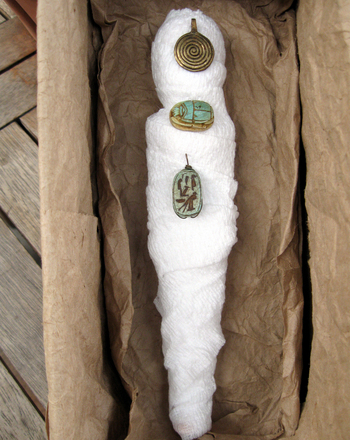 Ancient Egyptians believed that anything placed within a sarcophagus would accompany the spirits of the dead into the afterlife. Kids can learn more about this ancient tradition by using a shoebox to make a sarcophagus of their own. After they've finished making and decorating a sarcophagus fit for a Pharaoh, they'll find and make special treasures for the mummy to take with him to the afterlife. This activity encourages creativity and teaches kids about history at the same time!

With the tomb complete, all that's lacking is a mummy! If your child wants a mummy, he can wrap a doll in some toilet paper and place it inside the sarcophagus. Now, help him find a great place to display his new creation!