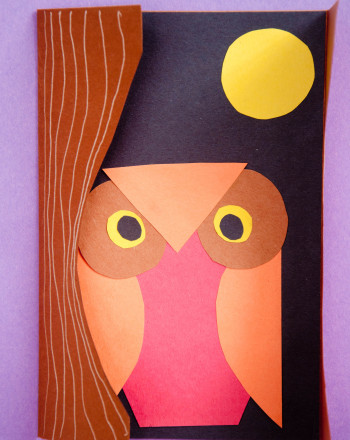 This cute owl craft will get your child excited about fall and Halloween! Make this beautiful card with your child by creating and cutting out complex shapes, and then layering and arranging them to make an owl. When closed, the flaps of the card turn into the bark of a tree, with the owl peeking out from behind. Open the card to reveal a moon against a dark sky. Spooky and elegant, this cute owl craft is the perfect way to celebrate the transition of seasons and, of course, it makes for the perfect Halloween activity!

Owls are amazing animals. They are nocturnal, and for the most part, solitary. When you spot an owl, you should feel lucky. In many world cultures, owls symbolize wisdom and are considered to be guardians of the afterlife. Members of many Native American tribes often wore owl feathers in important rituals in an effort to ward off malicious spirits.