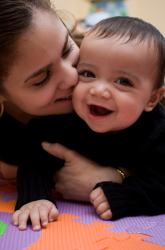 Parents might feel like they’re traversing an ever-changing landscape of parenting issues, with modern problems like cyber-bullying and rising celebrity culture providing new challenges. But while the world evolves at a rapid rate, the best parenting advice stands the test of time. These 10 parenting quotes are as relevant today as they were when they were first spoken.

“Children are educated by what the grown-up is and not by his talk.” –Carl Jung

Swiss psychiatrist Carl Jung was best known for his theories about personalities, but raising five children may have been his proudest achievement. Jung knew you can’t simply tell your kids what to do—you must lead by example.

“Parents can only give good advice or put them on the right paths, but the final forming of a person's character lies in their own hands.” –Anne Frank

Sadly she never lived to raise her own children, but Holocaust victim Anne Frank still knew a thing or two about parenting. Perhaps her family’s struggles taught her that no parent can guarantee a child’s success or failure. Instead she recognized the wisdom and morals parents can pass on to their offspring. While these tools will give children the best start, it’s ultimately up to them how they’re used.

The silver screen icon was all too aware of the downsides of being a parent. No doubt this mom of three had to make some hard decisions at home. There’s nothing glamorous about those occasions when your angels are cursing you out for laying down the law. Their behaviour can sting, but don’t let that weaken your resolve. The best parents know they can’t play the good cop all the time.

“It is easier to build strong children than to repair broken men.” –Frederick Douglass

“One thing I had learned from watching chimpanzees with their infants is that having a child should be fun.” –Jane Goodall

Parents face enormous pressure from the moms and dads around them, and themselves. But don’t let it get to you. Jane Goodall, a primatologist and mother of one, saw we’re not so different than our animal friends. Just like the chimps, we should appreciate the joys of the present rather than obsessing about the uncertainty of the future and the failures of the past.

“The best way to make children good is to make them happy.” –Oscar Wilde

He has a point: children who behave the best tend to be the happiest. Those who feel neglected, misunderstood or under pressure are the ones who typically act out. Discipline is important of course, but it should never be the overriding force in a child’s life.

“When a man dies, if he can pass enthusiasm along to his children, he has left them an estate of incalculable value.” –Thomas Edison

You can pass on wisdom and ethics to your child, but inventor Thomas Edison believed these were surpassed by enthusiasm. After raising six children, Edison certainly had the experience to make such a claim. Enthusiasm drives people to learn and to succeed, so instilling it in your child can’t be a bad thing.

“Children are apt to live up to what you believe of them.” –Lady Bird Johnson

Lady Bird Johnson was one of America’s most beloved First Ladies and a devoted mother of two. She believed that praise and support help children reach their potential. It’s hard to argue when you consider how well her offspring turned out. Lynda was the First Lady of Virginia and a board member of several charity groups. Younger child Luci is a successful businesswoman.

“It is time for parents to teach young people that in diversity there is beauty and there is strength.” –Maya Angelou

Poet Maya Angelou encourages all parents to do as she has done and teach children about diversity. The mother of one believes children should learn to celebrate their own differences and those of people around them. Her words remind us that attitudes about race, sexuality and religion begin at home.

“Most things are good, and they are the strongest things; but there are evil things too, and you are not doing a child a favor by trying to shield him from reality. The important thing is to teach a child that good can always triumph over evil.” –Walt Disney

Walt Disney’s philosophy is poignant in a world where we’re bombarded with tales of violent crimes, poverty and suffering. Many parents attempt to shield their offspring from the darker side of life, but it’s a difficult task. Instead we can remind our children of the power of the human nature and the generosity of the global community. It might seem simplistic, but these positive forces can provide great comfort.

These historic pieces of wisdom might not help you out of your next parenting jam, they might help you avoid the one after that. So don’t just read these quotes—put them to use!

Next Article: Teaching Your Middle School Student Good Study Habits
We enable strictly necessary cookies to give you the best possible experience on Education.com.Cookie policy