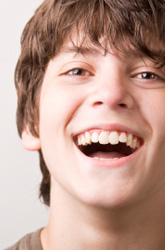 For teens, life is not a playground, it's a jungle. And, being the parent of a teenager isn't any walk in the park, either. In his book, The 7 Habits of Highly Effective Teens, author Sean Covey attempts to provide "a compass to help teens and their parents navigate the problems they encounter daily."

How will they deal with peer pressure? Motivation? Success or lack thereof? The life of a teenager is full of tough issues and life-changing decisions. As a parent, you are responsible to help them learn the principles and ethics that will help them to reach their goals and live a successful life.

While it's all well and good to tell kids how to live their lives, "teens watch what you do more than they listen to what you say," Covey says. So practice what you preach. Your example can be very influential.

Covey himself has done well by following a parent's example. His dad, Stephen Covey, wrote the book The 7 Habits of Highly Successful People, which sold over 15 million copies. Sean's a chip off the old block, and no slacker. His own book has rung in a more than respectable 2 million copies sold. Here are his seven habits, and some ideas for helping your teen understand and apply them:

Being proactive is the key to unlocking the other habits. Help your teen take control and responsibility for her life. Proactive people understand that they are responsible for their own happiness or unhappiness. They don't blame others for their own actions or feelings.

Begin With the End in Mind

If teens aren't clear about where they want to end up in life, about their values, goals, and what they stand for, they will wander, waste time, and be tossed to and fro by the opinions of others. Help your teen create a personal mission statement which will act as a road map and direct and guide his decision-making process.

This habit helps teens prioritize and manage their time so that they focus on and complete the most important things in their lives. Putting first things first also means learning to overcome fears and being strong during difficult times. It's living life according to what matters most.

Teens can learn to foster the belief that it is possible to create an atmosphere of win-win in every relationship. This habit encourages the idea that in any given discussion or situation both parties can arrive at a mutually beneficial solution. Your teen will learn to celebrate the accomplishments of others instead of being threatened by them.

Seek First to Understand, Then to be Understood

Because most people don't listen very well, one of the great frustrations in life is that many don't feel understood. This habit will ensure your teen learns the most important communication skill there is: active listening.

Synergy is achieved when two or more people work together to create something better than either could alone. Through this habit, teens learn it doesn't have to be "your way" or "my way" but rather a better way, a higher way. Synergy allows teens to value differences and better appreciate others.

Teens should never get too busy living to take time to renew themselves. When a teen "sharpens the saw" she is keeping her personal self sharp so that she can better deal with life. It means regularly renewing and strengthening the four key dimensions of life – body, brain, heart, and soul.