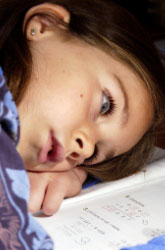 Every parent wants to see her child keep up with peers, and these days that means taking algebra in the eighth grade. But sometimes we forget that algebra is a very demanding course, full of sophisticated and abstract ideas. Do students really need to take this higher math course in lower grades, or can it do them more harm than good?

There are two sides to the issue. Politicians like the idea of offering algebra in middle school. They argue that the world has sped up over the past generation; technology has gotten more complicated, ideas more complex. Why not introduce harder concepts at younger ages? In 2008, California lawmakers began a campaign to make algebra mandatory for eighth-graders, a shift that Gov. Arnold Schwarzenegger compared to President John F. Kennedy's pledge to put a man on the moon.

Meanwhile, many researchers believe that middle school students aren’t ready for algebra. In a 2008 letter to the editor of The Ventura County Star, Professor of Education Dr. Bruce Mitchell argued against California’s proposal. His letter referenced the studies of Dr. Herman Epstein, who believed that the human brain has rapid growth periods and plateau periods where no growth seems to take place. For most students, the middle school years occur during a plateau stage, and Epstein argued that "the plateau stages were not optimal times for the introduction of new higher-level thought processes, particularly algebra, which eighth-grade students fail more than any other subject. Historically, algebra has been most often offered in grades 10 though 12. That occurs during the age 14-17 growth-spurt stage, when it's OK to teach abstract reasoning concepts.”

To get some answers from a hands-on expert, I spoke with award-winning high school math teacher, Jerry Brodkey. Dr. Brodkey has a PhD from Stanford in Mathematics and Curriculum Education, and has taught math for thirty-one years. He had some definite opinions about the move to teach algebra at younger and younger ages.

The “normal” track for math classes has shifted down in the past ten years.

The pressure to stay on the new “normal” track pushes students into math classes for which they are not ready.

Every year, Dr. Brodkey meets with parents whose freshmen have been appropriately placed in algebra. But want to know how they can accelerate their children onto the new “normal” track so they will reach AP Calculus by their senior year. In turn, Dr. Brodkey asks the parents whether the student wants to make this jump, or if it’s a parent-driven decision. He asks them to be careful: “When a student is pushed to take a class for which he is not ready, he rarely acquires a lifelong affinity for math. Instead, he develops a desire to get out of math classes as fast as possible.” He has found that when these students get to Calculus, they can struggle. They can do the first step in the problem, but not the next nine that require solid algebra skills.

Parents push their children onto this track because they think it’s necessary for college admissions.

Parents are feeling tremendous pressure about getting their children into college. They are seeing students with a 4.3 GPA get turned away from top universities, and they are desperate to find an advantage for their child. But from Dr. Brodkey’s perspective, pushing a child onto the Calculus track doesn’t always help: “I think that college admissions officers like to see a student with a solid foundation, effective communication skills, and a record of working well with others, not someone who has struggled to fit in an extra AP class.”

The move to introduce algebra in lower grades comes from politicians, not teachers.

Like many teachers, Dr. Brodkey questions the motives for California’s campaign for eighth grade algebra: “I think that this push is part of a political agenda to show rigor in the schools. I can’t see how it’s a positive; it’s not a student-centered decision. Any student can learn algebra, but the timing is critical.” Algebra is an extremely challenging course, even more so than Calculus. Teachers introduce a brand-new topic every three or four weeks, and expect complete mastery. Thirteen and fourteen-year-old students are still developing their emotional and organizational skills, and algebra is a course that punishes any immaturity a student may have.

Algebra can be taught at lower ages, if it’s introduced slowly.

Dr. Brodkey approves of the movement to layer algebraic concepts into early education. He asks his eight-year-old daughter questions like, “What number plus eight will make twelve?” He talks to his ten-year-old son about inequalities. But he feels that the traditional way algebra is taught now, with its demanding pace, is not appropriate for all middle school students. “Eighth grade algebra is fine for some students,” he says, “and there may even be one or two students per school who benefit from the increasing hyper-acceleration of algebra into the seventh grade. But to make it an expectation for all students is not doing them any good.”

The age at which a student takes algebra must be determined on a case-by-case basis.

The age at which a student takes algebra is an important and individual decision, not one that should be made by blanket policies. Parents and teachers must work closely together to determine a student’s placement. If you’re a parent wondering whether to accelerate your student, there are some clues to look for. Algebra-ready kids are:

If you think your child is struggling in any one of these three areas, you can do him a favor by waiting another year before enrolling him in algebra. Placing your child in the right math class will teach him to feel successful and confident about his math skills. But pushing him up when he’s not yet ready can bring on a case of math anxiety that will last for a lifetime.