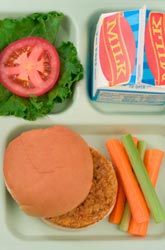 More than 60 years ago, the National School Lunch Program was established as a way to make sure the country's youth could count on a nutritious meal at school during the lean, post-war years. However, children today are facing a very different problem. "That has kind of shifted over the years and now we are at the opposite spectrum," said Rosemary Dederichs, director of the Food Services Department for the Minneapolis Public School District.

Now, more and more kids are battling obesity, and a study released recently mirrors that concern. Dederichs was one of 14 experts from around the country who worked nearly two years to come up with a study recommending the first new nutrition guidelines for school lunches in nearly 15 years.

The study by the Institute of Medicine, commissioned by the United States Department of Agriculture, concluded that school meals need to reduce sodium, add fruits, vegetables and whole grains, and include a cap on calories for the first time ever.

Dederichs said the study is great news for parents concerned about what their kids eat. "I think (parents) should be encouraged that school meals are getting healthier and will continue to be on that track," she said. "Any progress we make is going to be good."

The report also concluded that making school meals healthier will mean a boost in the prices of school lunches by as much as 25 percent, and an increase in breakfasts now offered at school by about 9 percent, according to the study.

The study does not weigh the likelihood that Congress will find additional money to enact the new guidelines in the school lunch program that feeds more than 31 million children. Nutrition programs in the country are estimated to cost $24 billion this year.

A spokesman for the Department of Agriculture said Secretary Tom Vilsack wasn't commenting on the report or the political realities of finding additional money for the school lunch program. In a statement issued along with the Institute of Medicine study, Vilsack said the department is "engaged in a thorough review of the IOM recommendations."

Dederichs, however, said she's confident the money will be found and the guidelines will be put in place. "I'm more than hopeful," she said. "I'm very encouraged and enthusiastic." Dederichs said she was part of a conference call in which the information was first released. "The remarks made by the USDA upon receiving the report were extremely positive, so I'm very, very encouraged by the response. "

The report was also warmly received by the School Nutrition Association, which has for years been calling on Congress to enact new nutritional guidelines for the school lunch program, according to Diane Pratt-Heavner, director of media relations for the group and its 55,000 members. "Many schools, prior to IOM's recommendations, have worked to limit sodium and calories and boost fruits, vegetables and whole grains in school meals," Pratt-Heavner said. "However, there is always room for improvement."

Pratt-Heavner said the SNA is calling on Congress to increase funds for the National School Lunch and Breakfast Programs. "We are hopeful that the reimbursement rate for school meals will be increased, particularly in light of the childhood obesity crisis and the unprecedented $1 billion proposed increase for child nutrition (requested) by President Obama."

Under the guidelines proposed in the IOM report, the current nutritional guidelines would be revised to establish a cap on calories for the first time.

Considering the obesity issue in the country, the calorie caps are one of the most significant parts of the study, Dederichs said, who emphasized her belief that the new guidelines will be put into effect, though not immediately.

"I don't have my crystal ball out, so I don't know how and when, but I have a lot of faith," she said.