When Preschoolers Talk Back 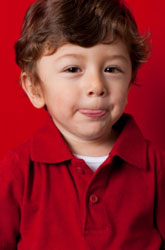 Although parents delight in their child’s first words, the inevitable appearance of 'talking back' can sometimes make parents yearn for the pre-verbal days. Talking back is very common in children of preschool age, usually beginning around age four or five. During this time, children are becoming more comfortable in general with the use of language.

As vocabulary and grammar become more automatic, children are free to focus attention on noticing how what they say (and how they say it) affects others and helps them get what they want. They are also starting to experiment both with control over their own lives and with control over the behavior of others. They are not intentionally being mean or trying to hurt your feelings, but they are trying to determine which of their behaviors provokes a reaction from you.

Like many other unwanted behaviors, the key to preventing backtalk is in stopping it early before it becomes habitual, accepted behavior. Think about the habits that you want to establish now so as to prevent similar problems from on a more consequential scale when your child is a teenager. You are teaching your child the skills he will need in the world outside of your home. Your child’s understanding of how he is allowed and expected to speak to you will translate into his understanding of how to interact with others, which can impact both social and academic success.

Be consistent with both your expectations for your child’s behavior and the consequences for talking back, and you should eliminate the majority of disrespectful instances. Some ideas for dealing with young children who talk back include:

Nip it in the bud

Note when talking back and disobeying tends to occur, and try to prevent problems before they start. If your child tends to talk back only when she is hungry or tired, then try to prevent these states in your child by sticking to regular mealtimes and/or naptimes. Although your child does have to learn that she needs to be polite no matter how she feels, it will be less frustrating for you if you are dealing with fewer occurrences of disrespectful behavior, so you will be more likely to deal with those that do occur in an effective manner.

Be specific about what your child is doing that is disrespectful

Is she using a particular word or phrase, or does your concern stem from her tone of voice or body language? Young children may not yet understand how their words or behaviors are perceived by adults and simply need to be taught what is acceptable. As briefly as you can, name the behavior that you see, let your child know that it needs to stop, and tell your child what you would like to see instead.  Then return to what you were doing. Understand that it may take a few reminders before your child really learns what you expect.

Remember that the younger children are, the harder it is for them to understand broad, general statements. such as “Don’t be rude,” since they may not be aware of what makes their words or behavior “rude.” Instead, they need specifics, such as, “When I ask you to pick up your toys, you need to do it. You may not say ‘no’ when I ask you to do something.”

Teach your child that he will not get what he wants, nor will he get any attention, when he talks back. Stay very calm, paying attention to keeping your face and voice neutral when your child responds with backtalk, and let your child know that you can continue when he is able to talk with you in a more polite way. For example, say, “I do not listen to mean words, such as... You can find me in the kitchen when you are ready to talk politely without using those words.” Then walk away. Make sure that you always respond in a similar way to backtalk.

If you feel that your child understands what is expected of her, and backtalk continues, then set a consequence. Be specific about what behavior will not be tolerated and what the consequence will be if you see that behavior again. The consequence should occur immediately and be related to the backtalk. Remind your child of the link between the two, such as saying, “When you chose to say…, then you chose to leave the park.” Do not back down, no matter what your child says or does at the point.

Look out for positive behaviors

Keep in mind that while children should be given positive attention when they act politely, just because he asked for something in a polite manner does not mean that the child should get what he wants. Part of limiting backtalk is teaching your child that he is not entitled to everything he asks for, and that he needs to learn how to express anger or disappointment in a way that is not hurtful to others.

Look at your own behavior as a role model

How do you treat others when you are not able to get what you want? Do you react how you would want your child to react, either to you or to others in positions of authority? Pretend that your child is going to copy every one of your responses, in terms of words, tone of voice, and gestures, and then try to adjust your behavior accordingly.

Think about others that your child is exposed to, both children and adults, and try to limit your child’s interactions with those who tend to display rude behaviors. In addition, limit exposure to media that depicts children talking back to adults, especially when there are no consequences for doing so (or the consequence is the sounding of the laugh track). When you do see others talking back or being disrespectful, point out to your child the specific behavior you see and remind your child that you expect him to act in a kinder manner.

Next Article: Anger Management
We enable strictly necessary cookies to give you the best possible experience on Education.com.Cookie policy