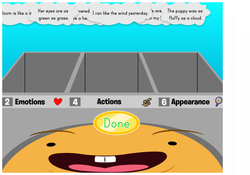 All Kinds of Sounds
Worksheet
All Kinds of Sounds
Having fun with words and sounds! Extend your students’ experience with onomatopoeia by giving them words to sort and asking them to identify how an author could use specific words in their writing.
4th grade
Reading & writing
Worksheet

Alliteration—words in a row or are close together that have the same first consonant sound—is a figure of speech that’s fun for kids to learn. They are commonly found in tongue-twisters or poems, but they occur in daily speech as well. With our worksheets and games, teach your student all about this literary stylistic device that will jazz up their writing.

If you’ve every played tongue twisters with your youngster, then they are familiar with alliteration. “She sells seashells by the seashore” and “Peter Piper picked a peck of pickled peppers” are probably some of the earliest examples they’ve ever heard.

In addition to tongue twisters, alliteration is common in poems and song lyrics. Alliteration works well in this format because the rhyming lends musicality in the words, making poems or songs easier to memorize. They also give flow and beauty to a piece of writing, something that your student will learn for themselves once they start using this device.

The best way to spot alliteration is to sound out the sentence. That way, your student can hear the identical consonant sounds. Invent alliterative sentence that they can try out, or have them write one themselves.

Examples:
Alice ate an awful lot of apples in August.
Eric eats eggs every evening.
We ate watermelon while waiting for William.

In teaching your students alliteration, point out examples of it in daily life.

Companies use alliteration to create brands that stick in the minds of consumers. People real and fictional stand out more when they have alliterative names. Writers love to use them to create memorable characters.