Acoustics: The Study of Sound 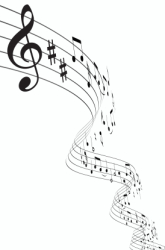 Purpose: The purpose of this experiment is to determine what kind of materials absorb sound waves of varying frequencies the most effectively.

Procedure: To test the sound insulation properties of each material, I used a enclosed box , to ensure a consistent environment for testing, a computer sine wave generation program, and a sound intensity meter. I placed each material in a the groove in the center of the box, then , using a speaker at a constant volume, would turn on the sine wave generator. I then took a reading of the sound level as measured by the sound meter, and compared each measurement to the original sound intensity, with no medium between speaker and meter, to determine that materials effectiveness.

Conclusion: I determined that the acoustical insulation material was the best and blocking the sound waves, this is that the material was designed to do, and this agrees with my hypothesis. The second best insulator was the wood plank, due to its density compared to the other materials used.

The only safety issue in my project was that of extended exposure to loud sounds, and to counter this I wore ear protection for time which the experiments were taking place.

Time Taken To Complete the Project

The project took about 16 hour to complete.

This project was about testing and experimenting with different materials to find which material, and in general, which traits of materials make them the most effective at stopping the transmission of sound.

All of these materials were either found at the local store, o on the internet, and all were readily available.

The background information for this project took the form of a 10 page review of literature, which I will not paste here to conserve length. The review of literature consisted of a study of the nature of sound, and waves in general, and how these waves interact with different materials.

The study of sound, acoustics, is very important in modern society as things become louder and louder but people want their lives to be quite. There is extensive research being done in the field of sound dampening to meet these popular needs today. The complete nature of a wave's interaction with a material is incredibly complex, and can not be fully understood by any person except professionals, so this leaves many minute questions open at the end of the experiment.

Many things had to be researched prior to the beginning of this experiment as I was unfamiliar with wave mathematics, and had done very little work with sound its self in the past.

How does sound interact with surfaces?

How does sound travel and propagate?

How does the composition of a material effect its acoustic properties?

These are but just a few of the many questions required to be answered for this project. 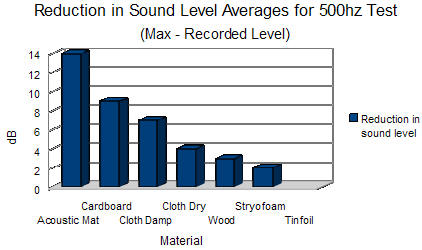 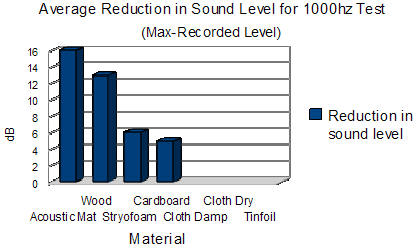 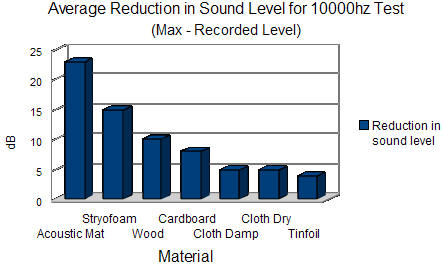 The shape of the box which was used to contain the experiment had a large effect on the results, and one would fine that using a different shape or size box would result in different data. That being said, the box used was a constant throughout the series of experiments, so it will not have effected the overall data of the experiment. The graphs are of the averages of the three trials of each material, but the data table following the graph for the experiment contains the data from each individual trail in addition to the averages. Most materials had an effect in reducing the sound intensity measured by the meter, but over all the acoustical material was the best at insulating, and wood was close behind. Tin foil actually caused to sound to amplify, most likely because it reflected the wave completely, which formed resonant waves.

As can be seen by the data tables, the acoustical insulation material was the best over all insulator of sound in the experiments of each frequency, which is as was predicted in the hypothesis. One can also see, that each other material was not as consistent as the acoustical insulation. each was differently effective at different frequencies of sound. This is due to the density and properties of the materials themselves, and the complex way these changes effect how the material interacts with waves, and specifically sound waves.

The main source of error in this experiment is due to the inaccuracy of the sound level meter, which has an analog display only accurate to the tenths place, so all of the values were slightly off of the actual value. This should not have effected the overall trends of the data in a very serious way though, because all of the trials and materials were subject to this same inaccuracy. To keep this source of error to a minimum, I allowed to meter to settle until it seemed to be sitting at one value, and took care to carefully discern this value as accurately as possible from the gauge.

To expand upon the concept of this experiment I would use a much wider variety of materials, and I would also change minute details of the materials to sees how these small changes would affect the acoustic properties of this material.

Acoustical Society of America, The. (16, October 2010). Acoustics. Retrieved from http://www.acoustics.org/education.html

University of California. (1996). Universe of Light: What is the Amplitude of a Wave? Retrieved from http://cse.ssl.berkeley.edu/light/measure_amp.html#measure4