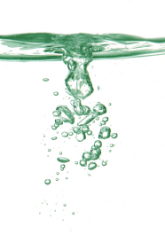 In this project three different methods of testing turbidity in water will be compared, the secchi disk, spectrophotometer, and turbidity test kit. Turbidity is caused by suspended particles that scatter light passing through water. Investigating turbidity in water is very important because SAV's (Submerged Aquatic Vegetation) need light to carry out photosynthesis, and if the turbidity is too high then the SAV's get less light and they might die.

In Problem 1, in order to establish the degree of variation within each test, fifteen different water samples were tested for turbidity using three different methods, test kit, secchi disk, and spectrophotometer. The same person did all of the tests.

In Problem 2, fifteen different people, using the three different methods, tested the same water sample in order to establish the degree of variation within each test.

Both sets of numbers were entered into a spreadsheet (Microsoft Excel 2000). For the first set of data, correlations were found between the secchi disk and the colorimeter, secchi disk and turbidity test kit, and turbidity test kit and colorimeter. The second set of data was used to determine the standard deviation within each test, turbidity, spectrophotometer, and secchi disk. Then the mean and the percentage of the mean were calculated from the standard deviation.

In conclusion this project shows that the secchi disk has a negative correlation in comparison to the other tests because it measures clarity, the opposite of turbidity. For any correlations involving the secchi disk a type of correlation was used that is for curves called a power regression. The Colorimeter and the turbidity test kit had a close correlation. The standard deviation data show that the Secchi disk is the most precise test and the turbidity test the least precise; the Colorimeter is very close to the secchi disk although not as precise. This is expected because the test kit is very dependent on perception and varies with each person and the colorimeter measures a small amount of water.

Precision: "The level of agreement or variability among a set of repeated measurements obtained under similar conditions. Precision is usually expressed as the standard deviation in absolute or relative terms." (EPA, "Volunteer Monitor's Guide to Quality Assurance Plans")

Turbidity is caused by suspended solid matter that scatters light passing throughout the water. Too much turbidity in the water causes gill damage in fish and makes it difficult for them to find food. There are three different ways to measure turbidity. The secchi disk, a 20cm circle that is divided into quarters, which are alternately black and white. It is attached to a rope and lowered into the water and the units of measurement are centimeters, which are marked on the rope. The spectrophotometer or Colorimeter is a machine that measures the amount of light that can pass through a sample of water in a clear 10 mL tube. The turbidity test kit involves two 50 ml granulated cylinders, distilled water, Standard Turbidity Reagent, and stirring rod.

Turbidity is very significant to life in the bay or any other body of water. SAV's (Submerged Aquatic Vegetation) similar to land plants need light to carryout photosynthesis, the process through which plants make food. If there is no light, there is no photosynthesis, leading to a decline in SAV's. SAV's are the start of many food chains. They are eaten by small fish, which are in turn eaten by larger fish, and these eaten by bigger fish, some of which are caught and eaten by humans. Light can reach twice as far as a secchi disk measures. For example if the secchi disk measurement is 30cm, the light can reach a depth of 60cm.

The secchi disk is a 20cm black and white disk that measures clarity. It is attached to a rope that is marked every 5cm alternating black and yellow markings. It is lowered into the water until it just disappears. Note the water surface level on the rope, then pull the disk up, as this is being done count the number of marks below the surface by "fives". This is your reading, in centimeters. For best results take your reading in the middle of the day and on the shady side of a pier to avoid glare. The secchi disk can only be used in the field.

The LaMotte Turbidity Test Kit #7519 is another way of measuring turbidity. The test kit consists of a bottle of standard turbidity reagent, two 50 mL graduated cylinders, distilled water, and a stirring rod. To start this test pour 50 mL of sample water in one cylinder and 50 mL of distilled water in the other cylinder. If the black dot at the bottom of the tube is not visible reduce the amount of water to 25 mL in both tubes. The next step is to add the standard turbidity reagent, add 0.5 mL at a time to the distilled water tube. After adding each increment stir then look at the bottom or the tube. If the black dots appear to be the same "fuzziness" the test is done, if not continue to add reagent until they look the same. Consult the chart included in each kit for readings in JTU's, Jackson Turbidity Units. The turbidity test kit can be used in the field or the lab.

* After using all the equipment should be washed out with distilled water and dried with a paper towel. *
Place the test kits away appropriately as well as carefully.

Two types of correlations were used for this project, a linear regression and power regression. The first was used for straight lines and the second was used for curves. This project shows that the Turbidity Test Kit and the Smart Colorimeter correlate closely to each other with a correlation of .95. For that set a linear regression was used because the data shows up as a straight line on the scatter plot. This is logical because the test kit and Colorimeter both measure the turbidity of a sample of water. The other two were measured using power regression because they were curves. The secchi disk to Colorimeter was a -.97; this is very high. The secchi disk to test kit was -.92, which is not as high. This was expected because as seen in the second section of this project these are the two most precise. The formula was available for all the regressions so predictions were done. It is now possible, using a spreadsheet, to predict readings fairly accurately from one test form another's readings.

These findings are significant to many groups, including LaMotte and the Chester River Foundation. LaMotte is the company that made all of the equipment that was used for this experiment; they would like to know how to improve the tests and which to eliminate. The Chester River Association Chester Testers is a group of volunteer monitors who monitor different sites along the Chester and Corsica Rivers, and might want to make it standard that the turbidity test be repeated and that all possible sites use a secchi disk. This experiment shows that the test kit might not be as precise. There are many possible corrections to be made in this project. One might want to do more than 15 tests. Also one might consider controlling what happened to the water more, no wind, rain, or evaporation. In this project there was no way to determine if the tests were standardized, or a known standard to test each kit's accuracy.

Suggestions to further study this issue are the following, it would be useful to know definitely if one of the tests is seriously flawed and how to fix it. To supplement this experiment one might want to investigate how SAV's and turbidity are related to each other. To test this one might want to grow SAV's and see how different levels of turbidity affect them.

A recommendation, based on this data, is for all the possible sites to use the secchi disk. Although in some places the water is too shallow, these sites should purchase a Colorimeter, the test kit is not precise enough and could create many problems with misjudging the health of the body of water. The test kit is not precise enough to be used for statewide-recognized data. The Colorimeter is fairly accurate and could replace other field test kits that aren't as accurate. It would also be beneficial for the Data Center to use a specific formula to translate all the readings into one type of number. This allows the data to be compared among different sites. In addition this makes the report easier for the general public to comprehend. This is important because not all the people who read this report have a scientific background.