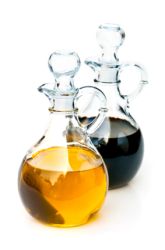 Cooking oil is necessary for all kinds of yummy food items from fried chicken to sauteed mushrooms. While the result is usually tasty, the process can get a bit hazy when oil starts to smoke. Have you ever been in the kitchen when the smoke alarm went off? The loud, annoying noise is used to warn people that smoke -- and possibly a fire -- are nearby. While important, it's definitely not fun to have the alarm go off in the middle of cooking dinner. Dive into the world of cooking oil and smoke points to discover just how fast some oils start smoking.

What type of cooking oil has the lowest smoking point?

You should have found that the canola oil and the mixed oil had the lowest smoke points. The olive oil's smoke point should have been at a significantly higher temperature.

Oil smoking points have everything to do with chemical composition, or the parts that make up the whole. The canola oil you used was unrefined. Unrefined oils usually have a much lower smoke point because the impurities that the refining process strips out are left untouched. In other words, the more impurities, the lower the smoke point. Olive oil is often refined, which is why it had such a higher smoke point. When you mix oils, like in your third bowl, the smoke point always adopts the same propertise as the oil that had the lowest smoke point -- in this case, the canola oil.

What do you think the advantages are of having an oil with a higher smoke point? Would you enjoy cooking with oil that frequently started smoking. Airing out the house and needing to turn off the smoke alarm can be annoying. Do you think cooking oil's smoking point can be altered by adding other ingredients like water or food? Conduct an another experiment to find out!